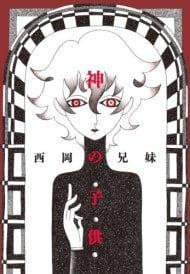 The twisted and deeply disturbing tale of a sociopathic serial killer...

Disgusting!  Don't get me wrong, the story is interesting but sometimes it made my stomach turn especailly with how young he was when he did some of the disturbing stuff like killing his cat and having sex with a dead collage girl. The character design is so weird and makes everything so much creepier but for this story it was great. Overall: Creepy

Story: Kami no Kodomo, or God's Child in English, is the story of a sociopathic serial killer. It's starts with before his birth and shows the span of his life, growing up and going to school and all of the trials he's faced with and all of the sick, twisted acts he accomplishes in his later years. The course of the story contains all manner of... icky and stomach-turning things. Defecation, consumption of said defecation, forced sexual congress, homicide... Okay, enough fancy talk. Poopin', poop eatin', rapin', and killin'. Loads of all of them. He gains a sort of cult of younger boys to please him in a variety of ways, and the cult eventually turns to be his downfall. The story is told simply and directly, from first-person point of view. Matter of fact, no emotional monologues to get in the way of what's happening. Art: The art is very simple. A good deal of it is kind of like zentangle, repeating patterns to grey out areas that you're not supposed to be paying attention to. It's never really pretty, but it gets the point across in a neat way. It's probably for the best, really. It keeps the stomach turning scenes from being stomach turning because of gore but because of what's going on. Characters: Only about four people get any sort of focus, because everyone else is lost in the crowd. Those people are the main character, whose psyche we are delving into into in his auto-biographical tale; a girl he knew when he was younger; a girl he met soon after; and a boy from his cult later on. Each of the girls are only in the story for a chapter and have few lines. The boy from the cult gets a little more focus, but because the story is told from the point of view of someone who lacks emotions and doesn't try to understand people, no one else develops at all, except in the physical sense he observes as he moves from elementary school to middle and high school. Overall, it's not a waste of time, but you have to like the sort of thing that puts you ill at ease or have a strong mind towards it. It's a very dark story, but it is interesting, especially if you've wondered what it's like to be a sociopath. It feels almost like you're in his shoes, and the basic idea is interesting. If it lasted longer than one volume it might have been more suspenseful, but as it stands it's a good, simple story.

A nonstandard art style. Spaced-out eyes and a Picasso-esque way of mixing side-view and straight-on angles for the noses and mouths. Sometimes, lines for the background objects will overlap with the lines for the foreground objects, creating a sense of details being tacked on with no forethought. There are woodcarving patterns in the edges of the panels and for shading and flair. A lot of just showing characters staring straight ahead. The first chapter shows the somewhat delusional aspect of this psychopath--how fe invented a myth of feir own birth, puffing up feir own importance. Chapters two and three show some developmental oddities, some of which coincide with traits that are associated with psychopathy such as a lack of empathy and cruelty to animals. Chapters four and five show feir first forays into murdering humans. Then chapters six through eleven are the meat of the story, showing the sex-murder cult of young boys that fe led and inspired. I honestly was engaged and interested throughout the story, though I did find it somewhat aimless and empty. Which is actually appropriate, as it's portraying an aimless and empty character. It also critiques the ugliness, isolation, and indifference of society.