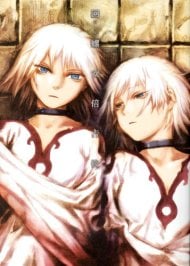 A girl suddenly finds herself in a room with an identical copy of herself; writing on their foreheads identifies them as 328 and 329. Although there's water, there's no food and all of the furniture is sized for an adult. A raft sits atop a freezing river, but it can only hold one of them. Meanwhile, a buzzing, huge insect tells a chilling tale: only one of them can take the raft to the next world, and must kill the other to do so...

768 users are tracking this. Log in to see stats. 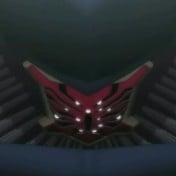 To be fair, I don't know exactly how I feel about this manga.  It's either incredibly dense and symbolic, or incredibly pretentious and poorly done.  I read it because it had a really fascinating premise.  Unfortunately, that premise is just horribly executed.  I could barely make heads or tales of what is going on it-STORY-In this story, two girls, who look exactly the same wake up in a weird room.  Long story short, they are told that one of them has to kill the other.  Now, that's a good basic premise, if you ask me.  But what follows is filled with unexplained, surreal, crazy imagery, with no real plot, or at least not a well-thought out one.Now, it is absolutely possible that this is a piece of art; something personal that means a lot to the author, but may be confusing to outsiders.  I tried to imagine this as some kind of allegory for growing up, but even that interpretation is based on such weird, vague, unfinished ideas that I don't think that is the case.  And it's worth noting that there is a message of apology from the author at the end which says that he had to rush while writing this, in order to to meet a deadline, and that it felt unfinished to him.  As a general rule of thumb, when the author has to apologize, that isn't a good sign.-ART-Well, I personally liked the art, but then again, I'm weird.  It starts off vivid and detailed and filled with violent, graphic imagery.  Then it becomes coarse and scratchy.  I liked it a lot, but without a story, it all kind of falls flat.  You see, the art style in a show should reflect the plot, the atmosphere, the mood of the story.  When there is no coherent plot, all the art does is look nice.  It's not able to do it's job.And the artwork is kind of inconsistent throughout, changing from highly detailed to almost impressionistic at times.  But again, I liked it, so what can I tell you?-CHARACTERS-Are you kidding?  The characters are almost non-existant, bland, and extremely undetailed.  I was very disappointed.  I don't know what else to say.  The two girls just didn't seem to have personalities, or at least the story never bothered to delve into that.  Bad.-OVERALL-Well, I'm glad I read this manga.  It had some nice artwork, and now I know what NOT to do if I ever want to create a comic book.  But should you read this?  Probably not.  Unless you art interested in diverse art styles of manga, or you're a big fan of the author, I'd just let this one pass.It was a nice idea, but horrifically executed.