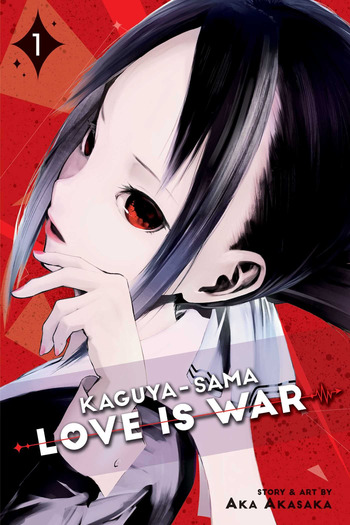 Master spy Twilight is the best at what he does when it comes to going undercover on dangerous missions in the name of a better world. But when he receives the ultimate impossible assignment—get married and have a kid—he may finally be in over his head! Not one to depend on others, Twilight has his work cut out for him procuring both a wife and a child for his mission to infiltrate an elite private school. What he doesn’t know is that the wife he’s chosen is an assassin and the child he’s adopted is a telepath!

Both are funny comedies.

Both have incredible plot settings.

Both are just fabulous.

Spy x Family and Love is War both have such wholesome banter and I love how overpowered the main couples are(in a good way~). Somehow the authors manage to blend two completely different people into a harmonious relationship based on the weirdest similarities. But, while there is a nice dynamic in each, personally I see a lot more human aspects in Spy x Family. They are both overpowered, sure, but they do have their moments that work really well with how the story progresses. This is much different from some of the many overpowered-mc-reborn-gets-revenge types, where the main girl is talked up as this boss bish but acts like an antisocial tween in order to be more "relatable." I dunno, that's just my opinion. Anyways yeah both manga are lighthearted and cute. :)

They are kind of the opposite of each other. In Spy X Family, the "Parents" slowly start to fall in love with each other.

Both heavily make use of mind games and similar, non-physical forms of warfare (spying, deception, intel gathering, etc), for comedy.

Both authors initially wanted to write/wrote a dark series rather than a comedy, and put their own unique twist on the genre instead.

Both feature hyper-competent characters (although Kaguya also focuses on their flaws to a large degree).

The art (particularly the shape of faces) looks similar.

Both are set in a world very similar to, but not quite the same as the real world. Spy x Family is set in what is basically Germany during the cold war, and Kaguya is set in today's time, except with some very slight modifications.

The story follows lawman Elmore Evans, who despite being one of the most amazing gunslingers in the West can't get rid of his bad luck in his romantic life.

Similar psychological "warfare" between characters that are romantically interested in each other. Similar comedy as well

It's pretty much Love is War but in the old west. I'm still very early in it but it feels pretty similar.

After moving out on his own to a seaside town, Iori Kitahara makes a college debut he never anticipated. A new chapter of his life unfolds, full of diving with beautiful girls and shenanigans with a gaggle of lovable bastards! Idiot expert Kenji Inoue and au-naturel authority Kimitake Yoshioka bring you a glorious college tale filled with booze-fueled antics!

Hear me out. On the surface, they may only have the comedy genre in common, but they actually share a lot of good comedy writing principles. If the things I describe below are part of your enjoyment of either series, give the other a shot, because they do, in fact, share them. Additionally, both delve into mature themes as well and often make things extreme to the point of absurdity for laughs, but this recommendation won't cover that in more detail.

TL:DR (for the blocks of text below): Misunderstandings aren't contrived and every chapter is both funny and very often contributes to the larger story (or our understanding of it) in some way in both manga. Enjoying this in either is a good reason to give the other a try.

Both are excellent at using misunderstandings:

Both give you a sense of progress as you are reading:

Many gag and comedy manga never go anywhere, which can feel frustrating, and make the stakes lose all their value. In both series, actions often have permanent consequences, relationships between characters change, we learn more about characters or their relationships, and so on. And all of this happens very regularly. Some chapters do appear to not progress much of anything, but that brings me to my next point...

Both series have a huge number of small details and callbacks:

Rereading them is very much worth it, and small details which first came up in a chapter that you thought was just there for fun, was actually used to set something up 30 or 100 chapters later. Thus, not only are all chapters hilarious, most of them contribute something to the larger story, even if mostly only small things. The stories don't meander endlessly, although admittedly less happens overall in Grand Blue than in Kaguya.

If you like either series in part because they don't fall in the annoying pitfalls that other comedy series do, I recommend that you give the other a chance.

They both include very dramatic reactions to somewhat ordinary (moreso in Kaguya) situations as a point of humour and entertainment, often over-exaggerated.

Both of these mangas are highly recommended to the readers. Both of these mangas are romance comedies. In both mangas 2 characters (a male and a female? develop feelings for each other but decide to go about it logically and calculated. This ends up complicating their love. However in "Love is War" both characters attempt to make the other confess their love 1st, while in "Rikei Ga Koi" the characters have already confessed but set ot to define love and PROVE their love is real. Both are interesting reads and add much to the rom-com genre.

They are both in a school setting. Boarding School Juliet and Kaguya-sama: Love is War, the main characters have feelings for each other but has many problems to overcome.

Follows a girl who's really good at acting, and the senpai she likes.

Both are preety unique takes on romance.

Well they are not exactly related but who cares since they both are amazing manga.

A certain boy and girl in middle school became lovers, flirted with each other, disagreed on trivial things, became more frequently irritated with each other rather than excited… and ended up breaking up on graduation. And so, the two of them, Irido Mizuto and Ayai Yume, wound up meeting each other in the most unexpected fashion. When they encounter each other in the bathroom, commute to and from school together… along with the memories of the past and living under the same roof, just how do they disregard each other!?

Both mangas have mind games between two characters.

Both mangas include characters that have pride in themselves.

Nagumo Keiichirou was a genius high-school detective. No case was complex enough for him. But what happens to genius detectives when they get older? Now 35, with bad hips, running a failing detective agency with no cases to solve and struggling to pay the rent, he's at a dead end. In comes a high school girl in his office who says she wants to work with him. With her help, will the out-of-touch, old-fashioned Nagumo get back the fire of his youth?

Both are comedy mangas that center on a group of characters that have different day-to-day experiences. While Mattaku Saikin has no overarching plot (at least from what I've read), they both are hilarious and feature a lot of the same ridiculous character tropes and dialogue as well as priceless facial experessions

A Violet at Zero Degrees Kelvin

Student Council Vice President Harunobu has never fallen in love before. She's dated various people and after recently breaking up with someone, again she finds herself being asked out. Will this girl finally be able to make her feel the heat of love?

Go For It, Nakamura!

Nakamura is a shy boy who falls in love at first sight with one of his classmates–his dreamy high school classmate, Hirose. But there's a problem: they haven't met yet. And Nakamura is a total klutz who might bungle things before they even begin!