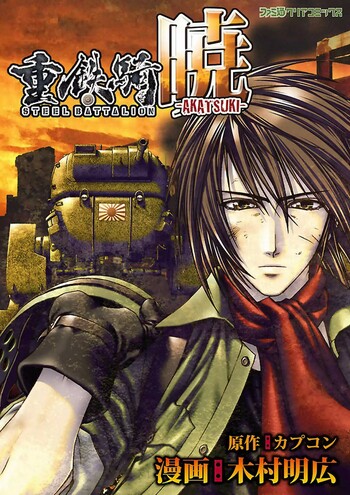 The One Year War between the Earth Federation and the Principality of Zeon has begun--and the newest Mobile Suits are tested for battle! Captain Matt Healy leads his team into dangerous territory as the leader of a Special Forces Experimental Unit. Ken Bederstadt is a Foreign Legion Lieutenant working in alliance with Zeon. These two heroes are trying to keep everyone alive... for tomorrow!

The year is T.C. 4767. Four thousand years have passed since humanity abandoned its birthplace, the planet Earth. Beset by the hostile alien Gnosis, mankind is now scrambling to find ways to defeat this threat to their existence. The development of KOS-MOS (a specialized android with amazing capabilities) by Vector engineer Shion Uzuki was one response to the threat, But when their ship is destroyed by the Gnosis, Shion and her companions find themselves thrust into the middle of a battle with no clear sides...

The Cosmic Era. Coordinators, born through genetic modification and Naturals, who are born naturally. Both experienced two great wars. People devoted themselves to fighting for things they believed in and things they should protect. Fighting gives birth to hatred and hatred in turn gives birth to sorrow. The battlefield swallows the fate of the soldiers and turned into the gravestone to an invisible future. Although a transient piece arrived in the end, the scars of war run deep. Yet in such a world, there were those who walked a path they strongly believed. Engineers giving their lives and roles to that which was discarded and destroyed: Junkers. Those who fight for those without power: Mercenaries. Those who convey the truth to the people: Journalists. Even if they deviate from the noble path, they will follow a path they believe in according to their own beliefs -Astray.

Universal Century 0079.03.18 – The Principality of Zeon carries out their third drop operation. The 4th Terrestrial Mobile division make their way down to Earth. Chief Petty Officer Cuaran arrives on Earth as a part of the 908th Mobile Reconnaissance Company 2nd Team’s Commander. He would later be the man who attempted to destroy the Federation’s “white mobile suit”, the dreaded “Gundam.”

The human race has one year left to live. Aliens known as the Gamilas have attacked Earth, poisoning it with radioactivity and driving humans underground. As humankind grows sicker by the day, their final hope is the space battleship Yamato–constructed from secret plans and equipped with advanced technology. Its mission: to reach a distant planet and bring back a cure to save humanity. Will the ship and its crew rescue the Earth in time?