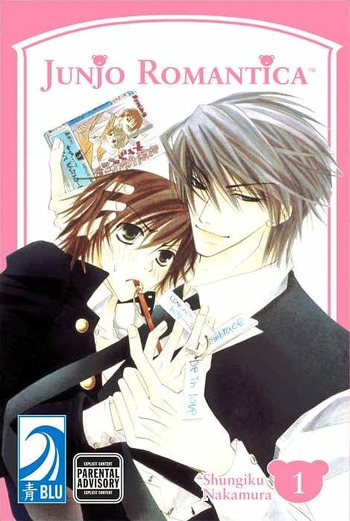 Junjou romantica is a pure romance. Truly. I liked the character development and the story line. How the characters were linked together in unusual circumstances. Usami came out strong and misaki cute. Misaki's brother is an airhead. I liked the setup of the story. I also had a laugh seeing usami's jealousy. I have watched the Anime before I started reading the manga. It's still an ongoing series so I just have to see how it progresses. Overall, a good read.

First I have watched the anime serie, and I loved it. To be honest I've watched probably three times already. I recently started to read manga. When I saw theire was also a manga serie of Junjou Romantica I wanted to read it.  But In the manga they jump even more often from one storyline into the next. I found it a bit confusing. I love the characters and the story itself.

In short I prefer the anime adaptation over the manga serie. Well I guess everyone has to decide what they prefer. So I definitly hope you give the manga and the anime a fair chance!!