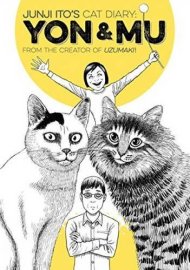 Horror mangaka Junji Itou is a dog person, but don't tell that to his fiancée, A-ko, who insists on adopting two adorable kitties, much to her husband's chagrin. In addition to managing his writing duties, Junji must now share his home with Muu, a Norwegian forest kitten, and Yon, a white cat with a skull pattern on his back. And as if things weren't bad enough, these two kitties manage to scratch up the furniture, make foul smells, and worst of all, cuddle with A-ko instead of him!

I was reminded of Jordan Peele's success as a horror director and how closely related comedy and horror can be. In many ways, this could've just been a self-indulgent portrayal of the cuteness of one's pets, but Junji Ito was able to transcend that by integrating it with horror techniques. The characters over-emote and their emotions are portrayed in the creepiest ways possible--with sputtery pupils and grimacing mouths. The best decision was to portray feir fiance's eyes as pure-white, since it makes us readers wonder how much that evil-looking portrayal bothered feir actual fiance/wife. The self-effacement is appreciated. The basic plot is just the everyday mannerisms of cats and J-kun going from distaste of cats to wanting them to love fem.

STORY- 6 I’ve never been quite sure what to think of horror mangaka Junji Itou, master of mainstream macabre. I find his manga highly entertaining, but for all the wrong reasons- as a fountain of camp and nonsense instead of a pit of unsettling despair. You can imagine my interest when I learned that he had penned an actual comedy manga, shedding the façade of horror and leaving behind only the wonderfully deranged comedy that had hindered his previous works from becoming truly terrifying. The autobiographical slice-of-life/gag manga revolves around the unwilling protagonist “J”, whose wife, "A-ko", has taken it upon herself to acquire a few cats and revamp their new house to better suit their feline needs. Although initially wary of cats, J eventually warms up to his new boarders, admits that they aren’t cursed, and craves their affection as much as his wife. The story continues on in this fashion, with each chapter detailing a situation that cat owners are likely to have experienced (such as a cat escaping through the window, or refusing to sleep on your bed no matter how hard you try to lure it there). There’s no real storyline, climax, or ending, just a collection of vignettes that simply stops before becoming too wearisome. While this would be insufferably dull if played straight, Ito portrays all these mundanities as if they were the most horrific thing imaginable, whimsically warping our very notion of normalcy. ART- 9 Much of the volume’s humor comes from the disparity between Junji Itou’s artwork and the story’s tone. Itou’s style is perfectly suited to his usual horror offerings, and he makes no attempts to change it to conform to a more traditional ‘comedy’ style. Even the most humdrum of actions, such as ascending a staircase, are portrayed as death-defying and terror-inducing, and the eerie lens the manga is seen through twists yawns and expressions of pure ecstatic joy into something considerably more macabre-looking. The result is delightfully weird. Even character designs aren’t safe from this infusion of horror: immaculate white sclera peer forth from A-ko’s sockets, only occasionally interrupted by pinpoint-sized pupils. CHARACTERS- 8 As a self-described ‘Cat Person’, I’ve always found the portrayal of felines in anime and manga abysmal. They’re increasingly drawn as amorphous blobs occasionally without appendages and oftener without personalities. Instead of being a realistic portrayal of felines, catblobs (like their human female counterpart, the moeblob) are intent on achieving nothing more than being as shallowly cute as possible. They mew uselessly, roll around on the floor, follow their owner about, and sleep, with little distinguishing them from scores of other similarly-characterized clones. Junji Itou’s cats, however, are akin to the animals I love in real life. His cats, Muu and Yon, tear about the house at high speeds, go ballistic when faced with a feather at the end of a stick, bite for no apparent reason, ignore you when you want to cuddle, get into things they’re not supposed to, and vomit- in sum, they’re monsters. However, the precious few moments when they do something cute, like jump into J’s lap to cuddle, are made even more adorable and genuinely heartwarming in comparison. OVERALL- 7.5 Cat detractors need not apply. This is for those who love their clawed ball of fluff and try every day to keep their internal crazy cat lady just that. Short and mindlessly fun, this is perfect for fans of felines or Itou. The dissonance between the breezy story and its sinister tone is hilarious, making this manga one of the funniest I’ve ever read, and finally cementing my opinion of Junji Itou as a brilliant mangaka.

The fact that one of the masters of horror actually did a manga under 'comedy' was bizarre enough of an idea to draw me into reading this, and I was very satisfied by it, oddly enough. Story: Junji and his wife (referred to as J-kun and A-ko in the story, respectively) have two cats named Yon and Muu that live in their house. And that's it. Well, it's more than that, but it's very honestly a slice-of-life story about the shenanigans and odd behaviors that cats get into because they're cats and while I'm not an avid cat person, it was still entertaining to read since cats are massive trolls by nature.  Art: From the beginning of his career it seems Junji has stood out with his own style: Thick and foreboding yet accurate and precisely detailed lines, expert use of ink to play off darkness and light to achieve the desired dark atmosphere, and the speed in which characters can flip from calm to deranged and unhinged between panels. Despite this technically being a story about cats in the same amount of silliness as, say, Chi's Sweet Home, the art is still Junji and he takes advantage of that fact by drawing what would be nonsense into something straight out of one of his horror stories complete with the cold-sweating, hollowed-eyed, haggard-and-bedeviled Junji and his wife when one of the cats does something...cat-like. The framing of their slight discomfort or giddiness over their cats is exaggerated as hysterical horror/happiness, which is in ofitself something I find very hilarious; in other words, the art makes these vignettes special, not simply the story itself. Characters: J-kun and A-ko are obviously exaggerated in their reactions to their cats in order to fit Junji's more outlandish way of characertizing people in his manga but that only makes it more entertaining. The cats are, well, cats. Little bastards at times but still very amusing to read about. I'd give it a read if you're a fan of Junji Itou's works and even if you aren't sure a comedy is your thing. It will be.