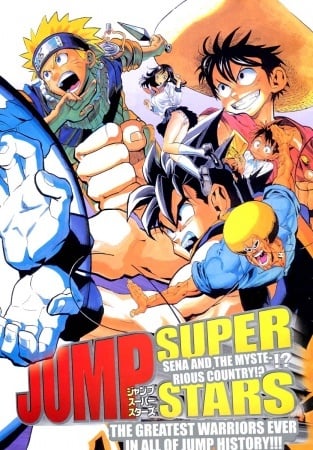 This combines two of the most distasteful and unentertaining types of manga into one package--advertisement for a product, with it shamelessly throwing out lines like "It's as cool as I thought it'd be," and self-gratifying indulgence, with the author reveling in feir own fame and fanboying feir favorite series. I swear, this type of sloppily thrown-together, unimpressively-drawn crossover story can't be considered fan service, 'cause what kind of fans would actually get excited for this crap? Though I can't say I understand the appeal of crossover stories in general since the very concept seems like a self-referencial circle jerk to me. Like, I can understand an artist hiding an easter egg homage to another series or maybe even a cameo appearance within feir own series, but the idea of fem trying to blend two distinct universes together just to show unconnected characters interacting feels pointless and masturbatory and I doubt it will ever lead to worthwhile storytelling. So, authors: Stop indulging in these non-stories that only serve to feed your own egos (or placate your editors). And editors: Stop exploiting famous series for money-grabbing purposes and commercials in manga form.