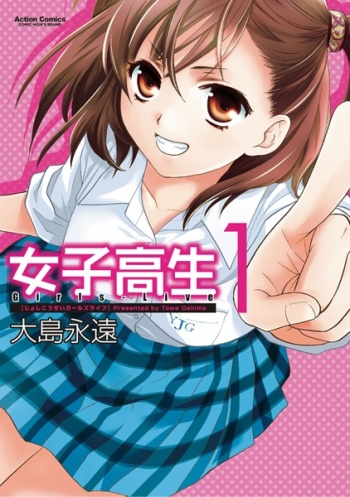 Masaki Masamichi has his heart set on joining the legendary manga club of Takidani High School. After all of his effort to get into Takidani High School and prepare for his club entrance, he finds out that a horrible change has happened to the club of which he dreamed. How will he cope with the disappointment of learning that his long-awaited club life consists of drawing ero-manga?

Boku to Kanojo no Game Sensou

Kishimine Kengo has avoided playing video games his whole life in a society filled with it. Instead, he prefers the comforts of books of which he has a tendency to get drawn into the story, perhaps a little too much. Every time he reads a story he unintentionally imagines reliving the story as the protagonist. When Kengo learns of the Modern Game club fate may let him use his imagination for another medium, video games.

Minazu Aruto loves reading novels and short stories so a classmate recommends a club that the school has called Philosophia. The classmate doesn't really know what the club is about but the name sparks a curiosity in Aruto and he decides to find out what it is. He goes to the old library on campus where he meets and is introduced to all three members of the group: Tomoe, Takaho and Kaede. Still without knowing what the Philosophia club is about, Aruto finds himself joining what he thinks is a literature club.

Junichi Sasaki joins his school's drama club upon entering high school. However, he soon finds himself dressing up as a girl for his first stage performance.

Shinta loves nothing more than girls, their school uniform, and their breasts. On the other hand, Shirasu was desperately looking for more members for the Fishing Club. Shinta, as the new transfer student, becomes the target of Shirasu for the Fishing Club. She persistently requests that he join the Fishing Club, but he strongly refuses because he has no interest in fishing. However, his joining of the Fishing Club becomes inevitable when he is saved from bullies by the well known “Tsuri-Chichi” Nagisa, apparently an expert in fishing. She has superb skills in fishing to a point where she can use her fishing rod as a weapon. Strong yet kind and having huge breasts, Nagisa becomes a trigger that changes Shinta’s perspective of fishing as she guarantees that Shinta has the potential of becoming a professional fisher.

Amana, Mizuho, and Riku are the members of the middle school 'romance' club, which has a rather vague mission statement. They decide to make it their club business to catch a recent serial pervert who exposes himself to little girls. Being cute young girls themselves, they may have an advantage over police in luring out the 'loli' pervert!

Shinichi Hosoi, a rather asocial guy,  has just started his dazzling first year of high school. He had a horrible time in middle school because of how he joined the sports club in order to be popular with girls, so he was determined to go out with a bookworm-type of girl in high school! But the absolutely gorgeous upperclassmen who come to him end up inviting him to... the high school weightlifting club?! The club is like a grove filled with nothing but tough, warrior-like girls... And to top it all off, every one of them is super erotic and love teaching him in ways where they can touch him as much as possible! Will this boy be able to keep his cool, even while being surrounded by beautiful muscle-head girls without any other guys in sight?!