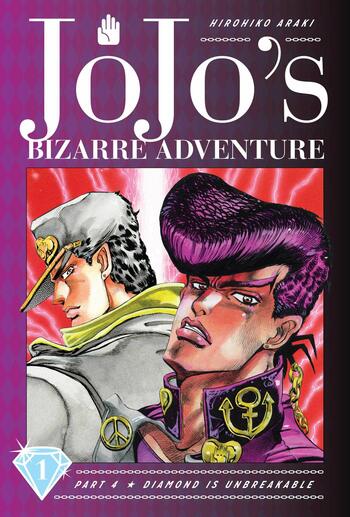 Diamond is Unbreakable (or DiU) is hands down in my opinion, the best Part in JoJo's Bizzare Adventure. The storytelling and characters have been perfected, and the shortcomings from Stardust Crusaders have be corrected. DiU is the manga any Shōunen should strive to be, and has little to criticise. I would say there are some side stories that are unnecessary, but for the most part, the well written cast seem to just bounce off each other. Overall, one of the best action mangas I've read, and would HIGHLY recommend it after you've finished Stardust Crusaders. Just don't tell Mista: he'll be shaking at the realisation four WAS lucky.

Story- This is the fourth story arc of the Jojo series, with the story focusing on one of Dio's henchmen using the bow and arrow to create a number of stand users. Joseph Joestar and Jotaro Kujo have come to warn Josuke Higashikata, this story arc's main protagonist. This is his story as he and others defend their town against those who would use their stands for evil, most notably Yoshikage Kira. I must admit I really got into enjoying the story, it didn't take long to develop Josuke's character during one of the first story bits. The first half of the series does a good job of introducing and developing the other main characters, such as Koichi, Okuyasu, Rohan, as well as other characters who have a few good moments that I got attached to, like Hayato, Yuuya, Shigekyo and Yukako. By the start of the second half though, when the characters meet Reimi the ghost girl and her dog Arnold, that is when the story begins to pick up with Kira. That was another interesting aspect of the series, when ghosts and aliens were introduced in this story arc.

Art- One thing that is for certain, Araki's artsyle keeps improving with every story arc, and this was definitely the case when I see the designs for the characters. The shading and the detail of the characters is true eye candy for those who are looking for a well drawn series, since Araki follows a specific formula for drawing panels for the Jojo series.

Characters- We have Josuke the main character for this story arc. I really enjoy his character being fun, kind, but quick to be angry and God help the fools who actually try to make fun of his hair. What I really liked was how he used his Crazy Diamond in various ways that helped him out, which shows the genius Araki is for how his characters use their powers. I think this is the story arc so far where I can love the large cast of characters. I loved Koichi, Rohan, Okuyasu, but I think Yuuya Fungami is one of my biggest favorites, with his Highway star stand and his growth as a character. And I can honestly say that Yoshikage Kira is one of the best written Jojo villains I have seen so far, probably one of the best anime and manga related too. Araki does a good job being very specific with how he wrote his personality, his quirks, what essentially made him who he is. What made him so interesting was that he wasn't out for world domination or some glamorous dream, what he really wanted was to simply have a normal life. And with that he was way more than being an obstacle or a villain, but as a character I think readers will remember long after they finish Diamond is Unbreakable.

Overall, I enjoyed this story arc a lot, and its my hope that the next story arcs will give me that same feeling of satisfaction and enjoyment!