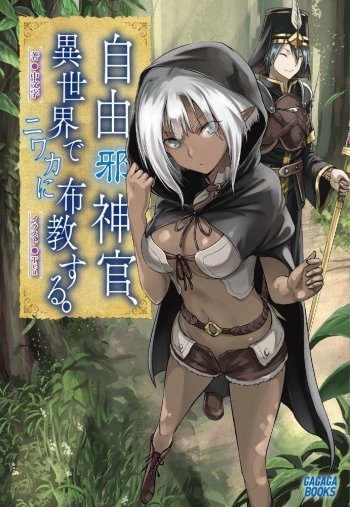 If you're looking for manga similar to Jiyuu Jashinkan, Isekai de Niwaka ni Fukyou suru. (Light Novel), you might like these titles.

"Awaken." Upon hearing this word, I woke up, and the first thing that I saw was this foreign world. For the sake of surviving in this "game-like world" of Grimgar, we can only cast aside our hesitation and fight... But sorry, I don’t like to follow the path that was arranged for me. I willl only walk the path that I desire.

Kazuhiro Kitase's main hobby is sleeping. Ever since he was young, he would enter a world within his dreams and go on exciting adventures. As he grew older, he became acquainted with a female Elf and the two have now been united through a Dragon's brand! As he wakes up one day, he notices a familiar figure sleeping next to him...the Elf girl from his dreams?! Join Kazuhiro on his new adventures through Japan with the lovely Ms. Elf!

For the skilled former adventurer Ryu, it's another eventful day at the Benevolent Mistress! A certain couple's only daughter has been kidnapped, bringing Ryu out into the streets to search for her, in the name of justice and Astrea. Her investigation of the missing child eventually leads her to a lawless area of the Labyrinth City, the Grand Casino, where money and power decide everything! This is the start of the Gale Wind's tale in the city of Orario, home of the Dungeon and adventure!

One day, in a certain private school with dormitories, the whole school was transported into another world. I, Gaya Kazuhisa, from the 1st Grade of the High School Section, had been bullied for long periods of time. To kill the culprit who had bullied me, I dug a trap, but unexpectedly I killed a monster. From that moment, I evolved into a rare existence that can go against the monsters. At the same day, I saved a girl from Middle School Section 3rd Grade, Shimozono Arisu in the forest from an Orc. When I was working with Arisu to defeat the Orcs, and gradually leveled up, I was forced to make a choice: Should I choose the Summon Magic which is suitable for surviving alone? Or should I choose Support Magic which is used when battling together with others?

42 year old "shachiku" (company slave) Matsuda Takeshi gets worked to death, as is customary in Japan. His one dying wish is to work for a decent enterprise, not the black company he had been working for. His wish is heard by a god who, for his own amusement, has him reincarnate as a young elf male in another world, with increased affinity for earth magic and ability to command golems. The new golem master sets out on a quest to acquire the Seven Treasures left behind by a legendary mage from 1000 years ago.

An ordinary university student that could be found anywhere, Hirasawa Kazuki, possessed a game character’s body when he came to his senses. Moreover, it was Harold Stokes’, the story’s most hated figure who held the title 『King of Trash 』. For him, tons of landmines appearing like death flags are in his surroundings! Can Kazuki evade the mountainous amount of death flags and advance through the survival route !?