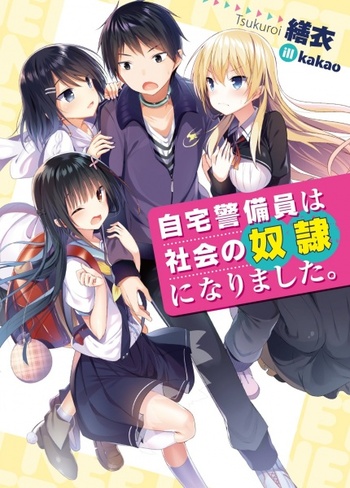 If you're looking for manga similar to Jitaku Keibiin wa Shakai no Dorei ni Narimashita. (Light Novel), you might like these titles.

One day, Yoichi who grew up while not knowing his parents has received the news of his father's death. His father left behind a testament——which said he is to pick only one out of five 'little sister candidates'?! The little sisters who were presented to him had more than one or two odd quirks, a slapstick comedy between siblings starts here!

Marriage Royale's story revolves around high school student named Tsukasa Hinomoto, who is told one day by his parents that he was adopted. Furthermore, they tell him that his real father is a manager of a large company, meaning he is very rich and holds a lot of power. Tsukasa's real father wants his son to marry a good woman, so he sets up an event known as Marriage Royale where beautiful girls from all over Japan will come together at a school built especially for the event and vie to become Tsukasa's fiancée. The school is located on an isolated island near Japan, and Tsukasa himself is taken there to live in a mansion in the care of two twin maids: Miku, the elder sister, and Miu, the younger sister.