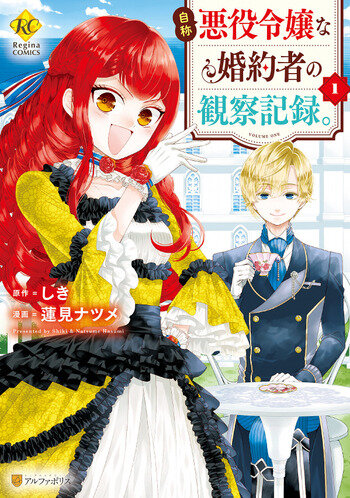 If you're looking for manga similar to Jishou Akuyaku Reijou na Konyakusha no Kansatsu Kiroku, you might like these titles.

Both have someone that played Otome games in their past life reincarnated as the Villianess of the game.

Only here the villainess is just trying to avoid her death flags and is preparing for the worst. She's just oblivious and nice in general.

More on the romance and avoiding/ tripping those kind of flags then preparing for event flags here.

But flags are tripped and avoided in both.

heroine character = the character a person would play in an otome game. The main focus of the game is her romance with a series of potential suitors.

rival character = a character made to stand in the way of the heroine character and one of her suitors.

1. In both, a japanese high school girl reincarnates into a rival character from one of the otome games she played before her death. In both, the rival character is seen to be an airhead, but they also work very hard to reach their goals.

- In MNLV:ARLD, the rival character is our perspective character. Her goal is to avoid the routes where her game counterpart got murdered and prepare herself for a route where she'll most likely be exiled.

- In FOLSPV, the rival character is not our perspective character. Her goal is to intentionally follow the game's storyline in the hopes of reaching the best ending, where the first prince and the game heroine end up together. This goal would cause her to become a sacrifice for the prince's happiness.

- In MNLV:ARLD, the first prince puts on an angelic persona to hide his more sadistic personality. He sets up his engagement to the rival character. The second prince is a tsundere who ended up with a brother complex in the game.

- In FOLSPV, the first prince is our perspective character. Because the rival character is straightforward in telling him exactly what her intentions are, he has more insight into her true nature. He also uses her knowledge of the game's event to shift things around for his own amusement. Not much is said about the second prince, but his appearance in later chapters suggests that he is a "shota/cute boy" type.

3. The heroine character is not introduced until later chapters, and both use light magic.

- In MNLV:ARLD, it's hinted that the heroine character falls in love with the rival character in lieu of her actual suitors from the game. She's a genuinely nice person that comes from a commoner family. She was accepted into the academy due to her rare magic.

- In FOLSPV, the heroine character has only just been physically introduced, but she's been mentioned by the rival character in the other chapters. In the world of FOLSPV, light magic is capable of brainwashing people, which the manga hints is how the heroine made her suitors fall in love in the game.

Both have someone that played Otome games in their past life reincarnated as the Villianess of the game.

Only here she awakened as the villianess after her bad end flags were tripped.

She now works, using her past memories, for the betterment of others and her fief.

Less with flags and more with solving problems.

Noble's daughter Mary Albert, in the middle of the school opening ceremony, remembers that this world was an otome game she played in her previous life, and she turns out to be a character from that game. The Mary inside the game was a villain, harassing and interfering with the heroine, and was met with destruction at the end: the so called "villainous girl's downfall route." And so the obvious reaction is - "This isn't a joke!?" and carefully avoids the destruction end - or not! Instead she trudges headlong towards the destruction end!

In both manga's the protagonist proclaims themselves as the villainess and says they'll act mean but instead they always end up being nice to the heroine and making friends with the prince and others.

I truly recommend both of these manga's.

As she was busy bullying the honour student with the power of light magic, Maria Campbell, along with her friends, the fifteen year old daughter of a Duke Katarina Claes suddenly hit her head and remembered her previous life. Thanks to those memories, Katarina realized that she was actually the villainess of an otome game that she had played in her previous life, with a struggle to avoid the destruction flags that would lead to her doom awaiting her... Except, there's not even a year left before her destruction end!? The story of Katarina, who is on the verge of her demise, begins now...!

When the duke's daughter Alice was five years old, she realized that her world is exactly like that of a particular otome game. As far as she's concerned, this world where magic and magical beasts are commonplace is paradise?! With good-looking boys and fluffy beasts all around, not to mention her cute school friends and dangerous rivals... what more of a dramatic isekai school life could Alice ask for?

I was reborn as a princess in the world an otome game with memories of my previous life. Wait, what? I'm the Heroine's love rival? You're kidding! I have no intention of falling in love with any of those pathetic guys, because the one I like is a support character, the Commander of the Royal Knights. Except the Heroine, after being reincarnated in this shitty game where the support characters are way better than the love interests, is threatening to bring down my own life with flags, and I am determined to strike them down.

Hinase Kaede lost her life on her 15th birthday. However, her soul was thrown into Erika, the villainess of an otome game! To avoid the bad ending, she decides to not get close to the main characters of the game in order to avoid the bad end.