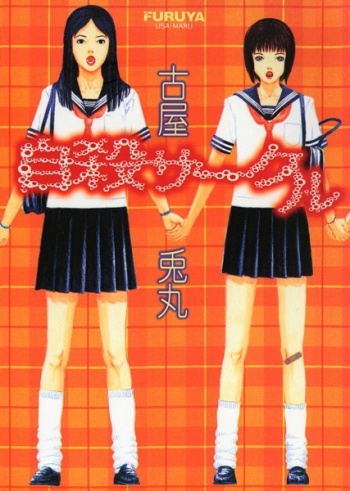 Based on the acclaimed film of the same name, Suicide Club bills itself as a reimagining rather than an adaptation of the movie. It begins with the same provocative scene that captivated film audiences but proceeds along a different, more personalized path. The imagery and story telling have all the grit and realism that makes Furuya Usamaru one of my favorite manga authors, but he manages to render the narrative in such a way that makes it not only more straightforward and digestible than the film but also more digestible than many of the plots of his own manga.

The "horror" designation in the tags is a little misleading. The story is graphic and violent and tragic, but it seems to be meant to shock with its subject matter rather than to scare or unnerve. Only the all-too-predictable horror trope of "will the killer strike again" conforms to the genre, but here it has been included with no small amount of irony. With suicide at epidemic levels in Japan, the "killer" will almost certainly strike again in ways that--as the story observes--will fail to attract public attention the way mass suicides do.

In the end, this is a short and straight-forward read that is just long enough to tell the story without becoming so long that the reader becomes desensitized to the images of violence and self-harm (of all sorts) peppered throughout. It is recommended for fans of Furuya Usamaru, the film Suicide Club, dark and violent manga in general, and meditations on social issues in particular.

As an additional Content Warning, there's also Nudity. I think this story is trying to send a message about "relating to oneself," and how one's sense of identity can become warped and broken if one is forced to go through tough times without any social support (i.e. without friends or family). It shows how cults can create a sense of belonging and purpose that can fill that gap. These girls have latched onto their brokenness itself as their identity, and unashamedly display their sliced-up forearms (the physical manifestation of their inner pain). They idolize the Mitsuko that leads them. I'm not super keen on the cyclical nature of these goings-ons, nor the implied psychic aspect. I also felt like the forums should've either had a stronger role in the plot or should've not been included at all; it felt like they were on the verge of importance, but weren't quite. The art is pretty bad.

Jisatsu Circle is an adaptation of the Suicide Club film released in 2002 written and directed by Sion Sono. The manga was originally meant to follow the film, however, Sono asked Usamaru Furuya to put his own spin on the story, giving the franchise a fresh makeover and a new plotline.

Having not watched the original film, reading Jisatsu Circle was my first look into this franchise and I was a little hesitant. It took me a while to decide if I would read the manga or watch the film first and I finally decided on the manga as it was a somewhat 'alternate universe' to the original creation.

I surprisingly enjoyed this. Following the story of a suicide club with an opening of fifty-five high school girls jumping in front of a high-speed train, this manga starts things off fast and then immediately slows them down. Following the mystery as to why one of the girls survived, we're slowly taken across a story of intrigue trying as Kyoko tries to figure out what is happening to save her best friend Saya.

There is quite a little bit of hype around this in the horror community as one of the best jisatsu genre one-shots, and similar stances, and although I thoroughly enjoyed this, I feel like it fell a little flat. We go from a simple suicide club plot line to an intricate maze of clues and frankly I feel like it was a little bit far fetched for what Usamaru tried to do with the story. The art was well done and the gore scenes definitely caught my attention. I skimmed this more than I read it, looking through the art and not paying much attention and I still managed to understand and get the entire story. It's simple enough to understand, simple enough to read, and it has a decent presence.

I'm not quite sure what was a little lacking in this for me. I believe it was the plot point that Usumaru went for in his work, the overall why they were doing this and it didn't feel as authentic as it could have done.

Still, it's a good seven out of ten for me, chilling to flick through, but not as prime as it could have been.