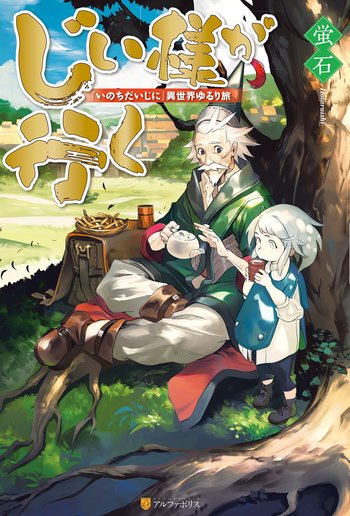 If you're looking for manga similar to Jii-sama ga Iku (Light Novel), you might like these titles.

At the request of God, a Japanese salaryman, Toudo Yuuki was transported into another world as practice for the actual Hero’s summoning. And now, he lives as the herbalist, Shin. Making use of his past knowledge, he concocts powerful potions and travels the world selling them. However, due to its potency, he was drawn into a certain country’s conspiracy. But, they did not know. That despite his outward appearance of a good-willed person, he in fact held the strength to slay even a dragon.

Hayami Shun is an ordinary worker at a trading company when he found himself floating in the sea in another world after walking out of the building. He was resigned to his fate of drowning when he was saved by a creature which had the upper body of a horse and a lower body of fish, a Kelpie who called herself Requaire. In this other world which had just entered the age of seafaring, Shun uses his in-depth knowledge of trading to make a name for himself. Along with the mysterious and expressive Kelpie, Requaire, will Shun be able to rise up in the market of trading!?

One day, Kosaka Mitsuki was abruptly sent on a trip to a different world. She was an otaku, so she adapted really fast. Then she decided to live her life as a magician. She made a living by making full use of the benefits of the automaticly translated knowledge and language of her original world. But reality was harsh.She was keenly aware that she was handling ‘Bishie’ from this different world who could easily conquer a maiden hearts and dreams.

Saitou is an ordinary handyman that gets transported to another world where his skills are very useful. He starts to really understand what it means to be needed.

Kazura bought a lottery ticket on a whim but he was selected as the winner and received 4 billion yen (about 40 Million US$). To evade the hyena's that smell the scent of money, Kazura takes shelter in an old residence that was handed down from generation to generation. When Kazura is investigating the place that would become his shelter, he stumbled on a certain room where it is possible to go to another world. The culture and technology level of that world is relatively low. The protagonist sometimes brings back goods or sometimes technological knowledge. At that world, he will find his value as a person.

Six years have passed since Urano began her new life as Myne, and so much has happened. She went from being a simple commoner to an apprentice shrine maiden, then she was thrown into the world of nobles as Rozemyne, the adopted daughter of an archduke! “But I’m not the only person with a lot going on! You can say the same for everyone else! Though, uh... I guess that’s mainly because of me.”

After a god screws up and accidentally takes high schooler Shou’s life, he offers him reincarnation with a gift to make up for it. Shou asks to retain all his old memories for the new life. Shou is reborn as Will, a noble’s son in a world where magic use is common and involves knowledge of kanji characters. With all his memories, he’s a brilliant toddler, and when he experiments with magic, he finds that he has an amazing talent for it! What’s more, though he was smart but unloved in his old life, in his new life he has a mother and a father who both love him deeply. His future as Will is looking very bright and cool!

A man who while playing a game in Japan, died of cardiac arrest. In the brink of death, he was asked a favor by the Goddess of the eroge he was playing "After defeating The Great Demonic Lord, please save the world from the tyranny of the hero" to save the world. Using his knowledge of the current era, and his summoning arts, this is the story of a man who steals the heroines of the hero...

"A falling star has brought the chaos. The throne of fate has lost its master. The nonbeliever who walks in light and darkness will make his debut. "In this magic world, knowledge is power.