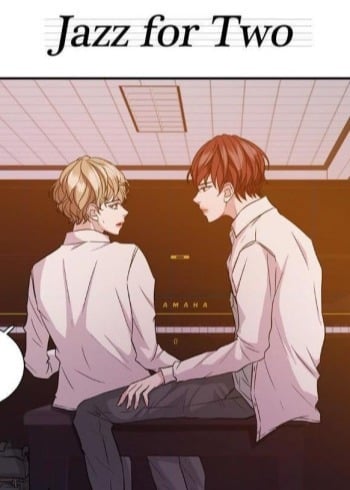 Openly gay college student Yu Yang hasn't entirely gotten over being rejected when he confessed to his classmate Lin Xiang last year, but at the start of a new term, he meets Li Huan; a tall, taciturn underclassman who soon becomes very precious to him. The two very different men get on each other's nerves at first, but as they slowly get to know one another, a deep love begins to bloom. No matter what difficulties Yu Yang encounters, Li Huan seems to always be there when he needs him most. But how long will it take Yu Yang to realize the perfect man for him is standing right by his side?

Both shounen-ai webcomics focus on a pair of guys who attend school together and start off with a less-than-friendly relationship that blossoms over time and shared struggles.

The Shape of Your Love

Yohan Jung has already seen the misery of unrequited love through his brother. He wants to save a senior club member from experiencing the same misery, but his effort of becoming a cupid isn't a smooth one.

Both are Korean webcomics starring high school boys who get off to a somewhat rocky start as friends but end up falling in love with each other.

Fujimoto Hiroya is at the top of his class. He's the Student Council Vice President, spends all his time studying, and is the idol of all the "good girls". But the truth is, he'd trade it all just for the chance to be someone else... someone popular, outgoing and carefree... Someone like Masaki.Masaki's what Fujimoto's friends would call an "idiot". He'd rather play soccer than study, almost never cracks a book, and is popular with all the "normal" kids. He's got flashy clothes, bleached hair and a reputation just as lousy as Fujimoto's is good.In the summer of Fujimoto's freshman year of high school, he resolves to change his image and his life... all to make friends with Masaki. But can dyed hair, new clothes and a piercing really change a person inside?

Yoru to Asa no Uta

Asaichi can't play any instruments and his voice is average, and he's only in a band for the girls and the sex. Plus, he's homophobic. For some reason the new bassist is infatuated with him despite the treatment asaichi gives him.

Ritsuka Uenoyama is bored with it all—with school, with his basketball club, and even with his one true passion: playing guitar. Until the day he finds his favorite hidden napping spot occupied by a strange boy cradling a broken-stringed guitar. At first, Uenoyama is nonplussed by Mafuyu Sato and his slightly odd behavior, but when, on a whim, he asks the other boy to sing, the power of Mafuyu’s voice pierces him to the core.

"The death of a 19 year old high school girl. This is the story of the guy that hung out with her." In the last year of high school, Ju Younghwa (19) is met with the suicide of his friend, Juwon. Right after her funeral, he gets into an accident that results in his memories being lost. Now, he slowly tries to learn about the past that lead to the death of Juwon.

A Shoulder to Cry On

Conor, a Korean-American, lives in a city where same-sex marriage has been legalized, but where racist and homophobic hate crimes are still frequent. He joins a band with the blonde hair, blue-eyed Simon and the two go on to create their own “dark heaven” in an abandoned church. Feelings develop between the pair, but light cannot dwell with dark, and their time together will soon come to an end...

On a hot summer afernoon, Hayato meets the new transfer student name Souma, who has not been able to adapt to the new environment. Hayato always manages to be in Souma's sight, and thinks he will be able to take care of him. The familiar touch allows Souma to familiarize with the environment, until he's able to smile once more. All the while Hayato tries to fix things from his past.

After his sickly brother, Gaeul, mysteriously commits suicide, Haneul Kim transfers to Gaeul's school determined to find out what drove his older sibling to his death. His only clue is the journal Gaeul left on his phone, leading Haneul to join the same club that both Gaeul and his lover, Hayoon Lee, were members of. Could the Reading Club be the reason Gaeul died? And can Haneul uncover the club's secrets and find the answers he seeks without becoming a victim himself?