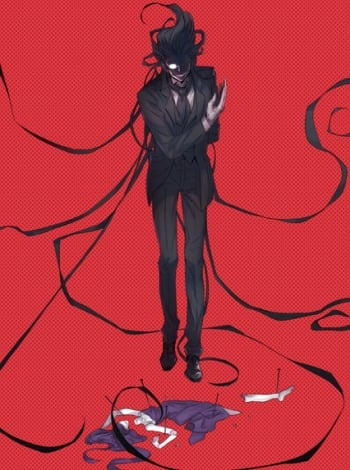 American Ghost Jack Part II is a continuation of the first American Ghost Jack manhwa. While it still holds the charm of the previous one it lacks in some departments. This time it's Go-Eun's turn to save the infamous Jack from the evil Sebastian. However, it turns more complicated than that as they two form their relationship. Someone makes a return as well to help aid them into winning. Of course it is not always as it seems yet with this one it was far more transparent than the first. While that isn't really a bad thing it's not a good thing either. It evolves around a new contract and her trying to save her attraction at an amusement park. She fights off many people in the process of saving two things she cares about.

The ghosts also make a return which is nice, the horror aspect was way lower than it was in the first one. It wasn't as scary nor was it as compelling. Compared to the first part it lacked yet it still was better than some of the things I read. I still thoroughly enjoyed it and I think it was the perfect ending to the series as a whole. That is if that was the ending. The art seemed much more clean this time around with more vivid colors, making you feel that Go-Eun herself is coming out of her shell, with her becoming brighter so does the manhwa. Though of course it still has it's dark moments to set the mood.

It is a lovely story regardless if it doesn't hold up to the first and it's still enjoyable to read. The team did a fantastic job portraying each character. Of course there wasn't much character development, it was subtle but regardless it was still there. The biggest was Jack himself and Go-Eun. They developed the most which is wonderful. I loved seeing their story become more and more intertwined together. I really enjoyed reading it. The manhwa focused far more time on romance than horror and it wasn't something I was really mad about. It was a cute romance horror that I suggest you give a read after you finish the first one.

This came as a disappointment to the first season. It's not horrible, but it's not really good either. The story was rushed and with it came plenty of plot holes and unanswered questions. They also re-used a lot of the ideas from the first season making this one almost feel like a bad remake. The art is just as good as the first season, and there are quite a few stunning images, but besides that it wasn't anything special.

If you loved the first season and expect the same quality in the second season, then you will be disappointed just as I was. However, if you're not super picky about plot holes and you just want a satisfying conclusion then you could give this one a read. It had a few funny, sad, sweet and gory moments just like the first season. Some scenes I really liked as they were well made, but there's a really disturbing one as well - if you've ever had a miscarriage then here's a trigger warning for you (episode name "the baby", and you can probably skip it if it upsets you).

I would have loved to see the author expand on some of the plot points and characters from the first season. They did bring back Aiden, which was nice, but he could have been more built upon, and Cindys character is more or less forgotten. But one character that does make it through in development is Go-Eun. Her character is different from the first season due to her development there, but she still acts true to herself. I did really like her character in the first season, but seeing her change is a nice surprise. It shows how big of an influence Jack had on her and how much she's grown as a person. I like that other characters accknowledge her change as well.

Overall it was a nice read to pass the time. Will I ever read it again? Probably not, but that doesn't mean I don't think others would. I could see how some people would love this season, and according to some of the comments on Taptastic there seems to be quite a big following for this manhwa.

Definitely good, but not as compelling as Part 1.

Story: In Part 2, the plot is basically the same except the change of setting and it's Ma Go-eun who makes the bet with Sebastian. It also shows us romantic moments between Ma Go-eun and Jack which I absolutely loved.

Characters: Remember the bastard who tried to evict Ma Go-eun and her father from that haunted house in Part 1? Yeah, well he makes more appearances in this one and is even more annoying now. Jack is absolutely adorable but still his old cranky self. Ma Go-eun is much brighter than before. Sebastian is an ostentatious b*tch who needs to back off.

Well folks, I am glad I wasn't proven wrong that Part 2 was rubbish at all because THANKFULLY IT WAS PRETTY DAMN GOOD.

We get more cute Jack x Go Eun moments, other thrilling moments, Sebastian becoming a pretty controlling devil that he is and honestly lots more that I can't tell.

Now I will admit, I wouldve liked to have seen more development in the ending but look, I'm not complaining. It was a great read for just one sitting and I'm happy out lads!