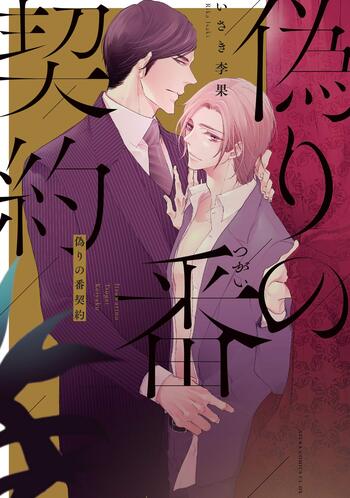 Take my High Heels Off

"Ken, do you really like me?" Kengo is always a little dry with his girlfriends, and that's what they say when they dump him. Then one day, he sees his classmate, Chiaki, dancing in high heels as part of a cultural festival presentation and gets a hard-on. He thinks it must be some mistake...... Depressed, but on his way to the after-party, he sees Chiaki going into a hotel with a strange man and finds himself further obsessed. Unable to contain himself, Kengo confronts Chiaki and...... What is this dark emotion......? A clumsy, straight, antisocial boy and a beautiful, gay, self-prostituting boy. A criss-cross love between male students muddled by infatuation and lust!!

Raised as the heir of the prestigious Ayamachi family, Ritsu believed his future as a wealthy alpha was set in stone. He would graduate high school, wed a pre-arranged partner, and follow the path his father laid out for him. The teenager has never been good at school, however, and his lack of alpha-like perfection leads his suspicious parent to have him retested. When it's discovered that Ritsu is actually an omega, his disgusted father no longer has any use for him and banishes him from the family in the cruelest way possible - by selling his son to a brothel, and into a life of sexual slavery.

Akito Kisaragi is a prostitute trying to survive in a world where omegas like himself are considered the lowest rung on the ladder of society. Abandoned by his mother at an early age and forced to use his body to earn his living, Akito didn't think his life could get much worse - until he is drugged and kidnapped by human traffickers. Sold at an auction for an exuberant amount of money, Akito falls into the hands of a wealthy alpha named Reiji Asahina. Reiji tells Akito he purchased him due to the Kisaragi family's well-known high fertility rate, and only wants one thing from him: to give birth to his child!