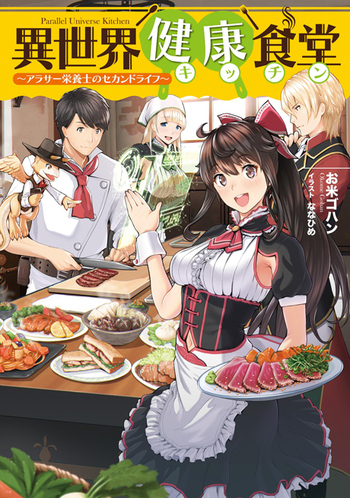 If you're looking for anime similar to Isekai Kitchen: Arasa Eiyoushi no Second Life (Light Novel), you might like these titles.

On a deserted street somewhere in Kyoto resides a Japanese style pub called “Izakaya Nobu.” But this hole in the wall holds a secret: its entrance is mysteriously linked to another world! Chief Nobuyuki Yazawa and his server, Shinobu Senke, have decided to open up business in this distant and strange land, an ancient city known as “Aitheria.” Palace guards, craftsmen, merchants, noblemen… Nobu’s doors are open for business, welcoming one and all with a cold beer and a warm meal!

Restaurant to Another World 2

The second season of Restaurant to Another World.

A special episode for a collaboration between Chuanyue Shihun De Lilian and Helu Conveyer Sushi at the at the Hualian Commercial Building.