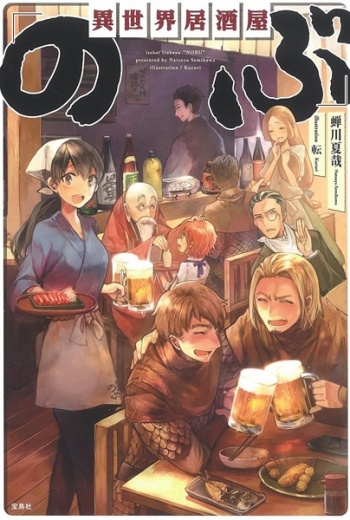 If you're looking for manga similar to Isekai Izakaya "Nobu" (Light Novel), you might like these titles.

Restaurant To Another World (Light Novel)

“Western Cuisine Nekoya” seems like a typical restaurant on the outside, but it hides an amazing secret: on Saturdays, portals to another world appear that allow all manner of unearthly creatures to sit down for a nice meal. Elves, dragons, or anyone else who wants to sample our world’s cuisine is welcome to partake before returning to their world, sated and ready for their next quest.

There is a certain restaurant in one corner of a shopping street near the office district. The historical restaurant, marked by a sign with a picture of a cat, is called "Western Cuisine Nekoya." This restaurant looks completely normal through the week, but on Saturdays, it opens in secret exclusively to some very unique guests. During these hours, doors in various areas of a parallel world open to allow customers of many different races and cultures into the restaurant. This "Restaurant to Another World" and its food hold an exotic charm to these highly diverse customers. This is a story of the heartwarming, once-in-a-lifetime encounters between our reality and another world, between the restaurant's customers and its owner, and the food shared among them all.

The strongest demon princess of the magical world, Valalice has come to destroy humanity starting with Tokyo. However, what was waiting for her was the all too delicious cooking of humanity such as curry, ramen, and pancake――!? Can Valalice beat the temptation of food!?