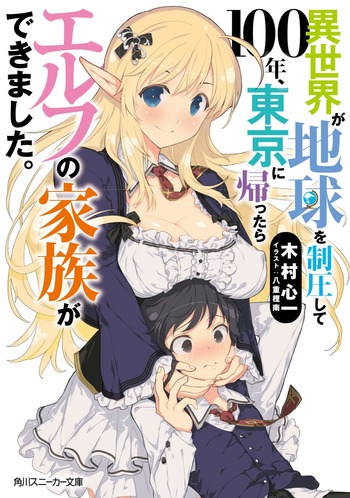 If you're looking for manga similar to Isekai ga Chikyuu wo Seiatsu Shite 100-nen, Tokyo ni Kaettara Elf no Kazoku ga Dekimashita. (Light Novel), you might like these titles.

The protagonist is an ordinary soldier from an empire at war who gets used as a guinea pig for genetic engineering experiments, turned into a monster and put into cryosleep. 200 years later he wakes up in a sword and sorcery world. The empire is gone and he has to survive alone in the body of a monster whom everybody wants to kill on sight. Meanwhile he encounters various pretty ladies (and elves) in need of rescue.

Kouichi Tooba has a one-sided crush on Kaede Yoshino, a girl who's completely out of his league - and the league of everyone in his class. Kouichi has completely resigned himself to the idea that his love will never make any progress, and that she will never think of him as anything more than a classmate. But one day on his way home from school, he finds a beautiful blonde-haired girl who had collapsed on the side of the road. "I'm an elf. And since you found me, I have to grant you a wish... Even though I'd rather not." The elf's name is Dahlia, and in order for her to make Kouichi's love come to fruition so she can go back to her own world, she begins living with him in his home. She can use her magic freely to make his love progress, but in order for her to do so, Kouichi and Dahlia have to kiss... Can this uninvited elf really make Kouichi's unrequited feelings for Kaede be realized?! Thus this story of conquering love with a selfish Cheer Elf begins!