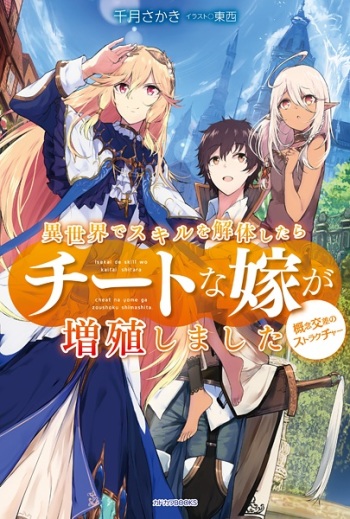 If you're looking for manga similar to Isekai de Skill wo Kaitai shitara Cheat na Yome ga Zoushoku Shimashita: Gainen Kousa no Structure (Light Novel), you might like these titles.

The strongest doesn’t need cheats. Haruka, a high school bookworm who spends his life as a loner, is suddenly summoned to another world with his classmates. Noticing the god in front of him, Haruka knew he was going to get cheat abilities by freely picking what he wanted from the skill list so that he could live in the other world - or so he thought. The skills were first come, first serve, and guess who missed out? After being saddled with the “loner NEET” attribute, making him unable to join any parties, he realises that even in another world, he’ll have to adventure in solitude. Haruka, recognizing the dangers his classmates will face, decides to secretly help them out while not relying on cheats. He’ll surpass even the most OP as he walks the path of the strongest.

The Magic in this Other World is Too Far Behind! (Light Novel)

Yamada Takashi thought he would lose his life in the snowy mountains — that's what he thought, but he was in an unknown place. Another world that looked like in the game. Moreover, there were many things he didn't know…

An ordinary university student that could be found anywhere, Hirasawa Kazuki, possessed a game character’s body when he came to his senses. Moreover, it was Harold Stokes’, the story’s most hated figure who held the title 『King of Trash 』. For him, tons of landmines appearing like death flags are in his surroundings! Can Kazuki evade the mountainous amount of death flags and advance through the survival route !?

One day, Hanebashi Yukinari was summoned to another world together with his classmates. His ability『Teleportation』 was written on a slate inside a deep forest and it was an ability that can make things move. Classmates that had awakened their abilities one next to the other just like him. And the survival in a different world had suddenly started. Inside the extreme situation……He realized. That only he can go back to Japan.

My name is Keima Masuda, and my hobby is doing exactly nothing every day... but one fateful night, I was summoned to another world where I met a blonde young girl who I named Rokuko. It seemed that fortune was on my side and I would soon be living a wonderful life free of work. But even though I'm a guy who loves sleeping more than eating, Rokuko demanded that I help her. “Save my dungeon! By the way, since you're the Dungeon Master, you'll die too if the Dungeon Core is destroyed.” The dungeon only had one room, and the Core was already surrounded by bandits. Seriously? It's a checkmate already. I've gotta break out of this impossible situation so I can stop working and just sleep!