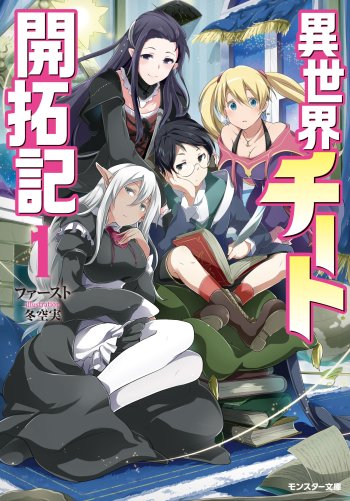 If you're looking for manga similar to Isekai Cheat Kaitakuki (Light Novel), you might like these titles.

Late has just accepted an assassination from a strange, mysterious client. To his surprise, it was actually the goddess Mises. A goddess from another world whose exsistence was on the brink of destruction after her defeat in war. Mises' quest… is to assassinate Masura Dzur, another god in her world. Late, the assassin with a 99.9% success rate, was tasked to assassinate a god in another world?!

A young man, Sanato was thrown into another world without gaining any special skills. Day after day, he worked as a street cleaner while hunting weak monsters on the side. But one day, he was suddenly fired from his job and lost his source of income—. That was when he experienced a life-changing event! He dived into a remote dungeon, where he met its ruler, a dragon who wished for its death. Sanato acknowledged its request, accepting its powers but refusing to become the next master of the dungeon. With his newfound strength—the dungeon core, Sanato strives to succeed in this different world with his skills!

High-school girl Sumire was thrown into another world, but when she came to, she had landed on a still-unconcious silver-haired man! In a series of happenings, she ended up working in the Beginner Adventurer’s Guild. With no special powers except for having a strange plant take a liking to her, what does Sumire’s future hold!?

Takanashi Yuma was working at the town festival when she finds a suspicious vendor and ends up winning a blank book. Apparently, the book grants any wish that is written on the pages. Yuma magically gets transported into a different world where she has taken the role of the demon lord’s temporary replacement and the only way to return back home is to somehow find a way to resurrect the previous dark lord. Unsure if she is dreaming or not, she decides to go with it and starts gathering her demon legion to find a way to bring back the evil Deltoria.

Kousuke Kurono was an Avenger. After being raped, his beloved little sister was left out in the cold and froze to death. From the time he was 13-years old, Kousuke made use of any possible means in order to exact his revenge. 5 years had passed, he achieved his revenge, but having lived solely for the sake of revenge, at the moment his revenge came to fruition, afterwards he couldn’t muster up the willpower to live on. That’s why, with the same knife he used to kill the culprit, he slit his own throat. However, he then heard a voice; “Is that not wasteful?”. When he came to, he found not his home, his country, nor his world——It was another world.

In the year 2006, Spring. 6th-grade elementary schooler Shimada Chika was fed up with her mother who kept preparing food for her brother, Takashi, who was run over by a truck last year. Chika was able to stay patient with everything else, but she was annoyed from the bottom of her heart with the new hobby that her mother started. Fumie operated the PC awkwardly, and wrote a light novel using the plot that Takashi left behind. It was a fantasy novel about Takashi being reincarnated in a different world, and used the knowledge of the present world to make weapons and stood against the demon lord. Chika, who wanted her to stop writing, consulted the former driver who hit her brother with a truck, Katayama., but Katayama was fascinated by the novel that Fumie wrote, and proposed a certain plan to Chika—.