Is it Wrong to Try to Pick Up Girls in a Dungeon? - Reviews 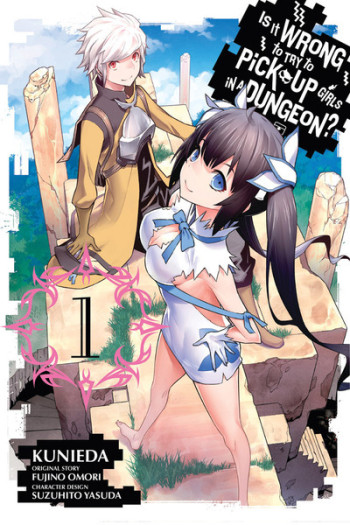 IMPORTANT: This is a little pointer http://www.anime-planet.com/manga/dungeon-ni-deai-o-motomeru-no-wa-machigatte-iru-darou-ka-gaiden-sword-oratoria/reviews

The huge labyrinth city, Orario, is the gateway to the huge underground maze commonly known as the “Dungeon”. Its strange name causes excitement, a place to gain honor, and maybe even a romance with a pretty girl. A place where people hold their breath, hoping to gain all they wish for, a place where a solitary young man meets a little "god".

"Alright, Bell-kun, follow me! It's time for the "Familiar" initiation rite to happen!"
"Yes! I'm going to get stronger!"

The fated meeting of a boy who wants to become an adventurer, and the failed god who doesn't even have a single follower.

This boy's journey as written by the goddess, "Family's Legend" (Familiar's Myth)

Ever since the breakthrough anime Sword art Online many manga, light nowels and anime have tried to capture the idea of the same concept, but of course with their own spinoff and variations, (e.g. Log horizon, Real account Log horizon...)

Bell is the main character of this manga, but unlike many of the characters he actually starts of crap, like literally he is baad. So Oomori Fujino (author) gets my attention due to being unique to the character at first. Bell is a person  who is caring, sacraficial and determined. I will have to say before i can continue this is more harem than SAO or anyothers i've seen. In this world 'Gods' chooses servants or people to serve them and join their pact, kinda like a guild. Each 'guild; (im going to use this term from now on) all have a theme or genre based on their leader(god). Bell begins in the manga already in a 'guild' by a 'God' named Hestia. But his guild only contains two people Bell and Hestia. As they are a small guild they go through tough times for money and sustaining them selves as Bell is the only fighter to go to the dungeon. As he journeys on he meets more people specifically girls who soon develops feelings for him as how harem gos.

The manga starts of Bell being saved by a girl who reminds me idk why of Asuna (SAO) and Esdeath (Akame ga kill) who goes by the name of Alzu Wallenstein. Who he admires and possibly loves her, but hates himself being saved by her. Which he 'awakens' without spoiling too much. She herself begins to notice him through his actions and slowly develops feelings for him (imo), which puts this manga in an interesting position.

So overall 9/10 will not fit everyone, but i like it, cause im a sucker for these types

i enjoyed the anime before the manga. There are minor differences in encounters and creature looks, was looking for that la forge eye piece on the silverback which wasn't there. nonetheless it is still a good read if you haven't yet

The manga should be labeled complete because they will not be adding more. light novel will continue but, as i have seen with other manga, once it goes to anime, they stop working on the manga. started 2013, anime came out in 2015 and there have been no new manga chapters. ah well