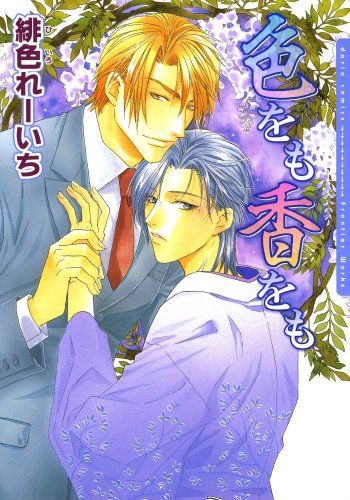 If you're looking for manga similar to Iro wo mo Kaori wo mo, you might like these titles.

Paint Love and the Colors Will Bloom

It's been a year since Ryuji Honjo graduated high school and started university. And so far, despite being recently dumped, he is having a grand old time. But what would his middle school self think about him now?... Meanwhile, Leo Ichinose, Ryuji's classmate in university, is as cool and reserved as ever. His unintentional glares scare people off. But something about him catches Ryuji's attention. Or... is it Ryuji who's caught Ichinose's attention? Ryuji swears he can feel his stares on him. Will the outgoing and charming Ryuji get along with the distant and unapproachable Ichinose? The two seem like polar opposites at first, but maybe they're not so different after all.

Shouta, a college student who suffers from hearing loss, and Ryu, a hairdresser, are best friends. As roommates, up till now their lives have been really good. But one day, Shouta gets confessed to by a girl! Although Shouta is pleased, Ryu becomes desperate to suppress his growing feelings.

The serious Ito and the child-like Nishi meet by chance during a single player game of “White Line Game” on the way home from school. Falling in-love, Ito gets frustrated over the fact that they only get to rendezvous on the white line and suddenly kisses Nishi. From high school, college and then to adulthood… the deeply moving lives of two men who are madly in love with unchanging feelings within changing realities.

Daycare teacher Yui doesn’t really like Rei’s super young daddy, Asagi. But after learning that 24-7 idiotically smiling Asagi is actually a kind and responsible daddy, Yui becomes conscious of Asagi. One day, Asagi collapses with a high fever and Yui comes over to tend to him. Yui ends up kissing Asagi who says in his fever, “stay with me, Yui.” But soon Yui is shocked to find out from Rei that Rei’s mother’s name is also “Yui.”

I thought it would go well for you and me from here on after. "Let's pretend it never happened. From the very beginning." Ono Shizuka is a baker who got into an argument with his partner Sakai and fell off the stairs. The accident caused him to forget about Sakai entirely. However, he now is very interested in the beautiful but lonely man.