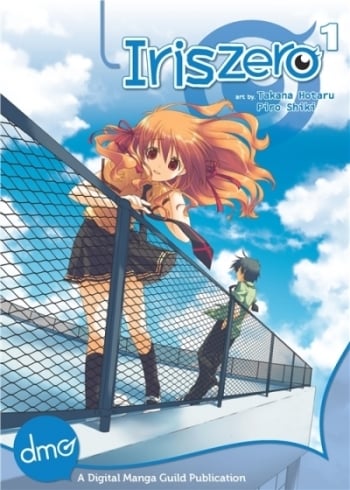 I don't know how I was able to put off reading Iris Zero until now, but I'm glad I did. I followed it from the start until the 7th chapter and then something made me take a break, which come to be a long one. Quite conveniently so, because the 10th chapter begins the first long arc, and I sure am glad I didn't read it until its concluding chapter, the 20th, was out. There are some bad cliffhangers.

For me, Iris Zero is the rare kind of manga where every single page is an enjoyment on its own. The art is excellent (and thankfully the scans are good quality), every line of the dialogue feels important, every panel is worth paying attention to. It lacks all the boring "filler" material, and yet it also lacks any unnecessary sense of urgency. The storytelling is damn near perfect in every way, save a few hard-to-spot plotholes.

Let's start with the art. This manga has a very clear and pleasant art style, where the panels are arranged with skill, where the emotional, dramatic and dark moments are all presented with equal skill. The girls are all really cute, and the guys, while they may seem ordinary at first, they all have some really cool moments. Last, but not least, the expressions are truly fantastic. There is strength in the style's simplicity, I can't help admiring the skill that makes every panel worth paying attention to, without relying on any kind of complex artistry.

The settings are quite simple, based on one conceptual innovation: everyone around the main character has a supernatural power, he alone among the important characters is what we think as "ordinary". Sounds interesting, but only as the settings for a short story, not really much potential for a long series, right? Well, these authors have apparently made it their mission to prove that kind of thinking wrong. Four volumes, and the story just keeps getting more interesting, without really adding any major elements into the settings. High school settings, practically no action, it's all just slice of life and detective stuff with a strong supernatural flavour and a romantic undertone.

It works far better than you'd expect: I've rarely been as excited by a battle manga as I was all the time while reading the arc that spanned from ch 10 to 20. This is a story that allows you to think and enjoy it, while not forcing you to do it, like most of those complex, psychological, dark-toned manga (Death Note, Liar Game etc.) It's not the most intelligent story I've read, there are a few plotholes here and there (the downside of the convenient abilities almost every character possesses is that they tend to open plotholes, especially the one that detects lies), but it's just twisty enough for my taste. It has moments of darkness and psychological depth, without ever getting truly depressing and heavy to read. Excellent balance, just as I like it.

The dialogue deserves a paragraph of its own. It's thorougly brilliant, never rushed yet always meaningful. Together with the art it makes the emotional scenes truly touching and the dramatic scenes truly cool. Every line has a purpose, whether it is plot-related, character-deepening, dramatic, funny or just a plain name or sound in the right place. I love the flow of the dialogue in this manga. Also, I really have to give the translator and editor (the scanlations are done in joint by Ala-Atra Scans and Simple Scans) the recognition they're due for their excellent work on this manga.

While the mysteries are all superficially centered on the "Iris", the supernatural, sight-related abilities that nearly every young person in that world possesses, in truth they're all character-related and heavy on psychology. While the protagonist's friends all have useful Irises, it's his ability that is always on the key role in the solving of the mystery. His ability to think from the POV of other people and make connections. He's the kind of "detective" who gets inside the heads of everyone involved and builds the picture from there. That's what makes him interesting, he's the rare kind of protagonist who's seemingly powerless, but actually very intelligent. There are other dimensions to his character, but to me, the most important thing about him is his intelligence. I'm thoroughly tired of stupid protagonists that get through every problem with hard-headedness.

So, Iris Zero is very character-centered and psychological. Well, it's a good thing that it's also one of the first manga I've ever read where every single major character is interesting. Not one of them is annoying in the slightest, they all have very distinct personalities and their own appeal. The main female character is ridiculously adorable and has the ability that's usually associated with a shounen protagonist: the ability to affect people with her words and deeds, her conviction. Her best friend has a discordant personality despite having a strong sense of justice, and the male lead's best friend has the most interesting, dark-toned Iris and excellent acting abilities. Then there are two more major characters who both have complex, central roles in the long arc which had me figuratively speaking sitting on the edge of my chair. But now I'm simplifying things. Each of those characters is remarkably multi-layered, and I fully expect to see more character development and layers unveiled in the future.

Finally, a word on the romance. So far love has played a prominent part in both dark and light parts in this manga, being a major motivator and driving force for many characters. Thankfully, it seems like there won't be a love triangle involving the male lead, even if the female lead is very popular. It seems like a very clean-cut, sweet romance with the potential to even make me cry. It's possible that the authors will start stalling, get scared of actually making something of it before the end - but since this is a seinen manga and so far it hasn't let me down about anything, I hold my hopes high.

I do hope Iris Zero gets a good anime adaptation some day, because this gem seriously needs more exposure and acknowledgement.

The story is amazing with the main character making up with his intellect and amazing detective like abilities for being an "Iris zero" and the mystery aspect of the story is really great with all the process of how the cases are done. I also like the fact that there are still a lot of parts that can still be filled in the story like

Who is the brother of koyuki?

what is he planning?

and why is it that when Toru's sister looks at her Brother's friend list noby shows up?

But the fact that the creator is still on hiatus makes me sad I hope it wont get cancelled.

There is not really a single word that one can use to describe this series. Set in a high school, it does not focus on the popular, the cool or the rich people, rather, it focuses on a lone student who is ostracized from the student body for being "different."

Plot - As mentioned above, the story is set in a high school and focuses on a character who is "different" from all the others. From the first page, the plot has you hooked. The slow development of the story into something fantastic, including the placement of the flashback chapters, is nigh on perfect. Rather than just focus on one section of the story, all the arcs and character developments interetwine to make the story flow that much better.

Characters - The characters are fantastic, each with a history that is feasible and links back into the story seamlessly. The main character, Mizushima Toru, is what one might call the epitome of a well developed character. His interactions with the other characters remains uniform throughout the story, keeping in line with his personality. The same goes for the other characters, they are well presented, each with their own charm that will make it difficult for a reader to choose a favourite. (Personally, I like the interactions between Mizushima and Yuki Asahi.)

Art - The art is fantastic, with clean lines and neat shading. However, the appearance of the characters seem to change rather significantly throughout the chapters. When the story first starts, one could pick them as thirteen to fourteen year olds, yet in the later chapters, they have a much more mature appearance (seventeen, eighteen.) Otherwise, no fault can be found with the story.

Sadly, as this review is being written, Iris Zero is currently on hiatus.
For updates, visit: twitter.com/takana_hotaru

Looking forward to the next chapter!