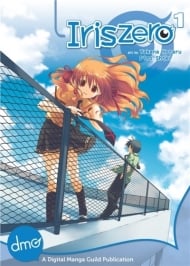 In a world where nearly every kid has a superpower called an “Iris,” only a few unfortunate people like Toru are born without. Bullied throughout his childhood, his motto in life is “Zero Attention” — keep your head down and don’t stand out. But after one of the most popular girls in school confesses to him, his motto is put to the test. The end of his ordinary days has arrived…

There is not really a single word that one can use to describe this series. Set in a high school, it does not focus on the popular, the cool or the rich people, rather, it focuses on a lone student who is ostracized from the student body for being "different." Plot - As mentioned above, the story is set in a high school and focuses on a character who is "different" from all the others. From the first page, the plot has you hooked. The slow development of the story into something fantastic, including the placement of the flashback chapters, is nigh on perfect. Rather than just focus on one section of the story, all the arcs and character developments interetwine to make the story flow that much better. Characters - The characters are fantastic, each with a history that is feasible and links back into the story seamlessly. The main character, Mizushima Toru, is what one might call the epitome of a well developed character. His interactions with the other characters remains uniform throughout the story, keeping in line with his personality. The same goes for the other characters, they are well presented, each with their own charm that will make it difficult for a reader to choose a favourite. (Personally, I like the interactions between Mizushima and Yuki Asahi.) Art - The art is fantastic, with clean lines and neat shading. However, the appearance of the characters seem to change rather significantly throughout the chapters. When the story first starts, one could pick them as thirteen to fourteen year olds, yet in the later chapters, they have a much more mature appearance (seventeen, eighteen.) Otherwise, no fault can be found with the story. Sadly, as this review is being written, Iris Zero is currently on hiatus.For updates, visit: twitter.com/takana_hotaru Looking forward to the next chapter!