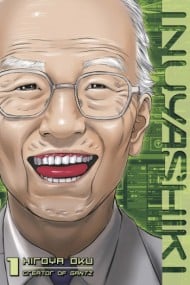 Great start but it slowly declined, in the end its not bad, just mediocre Contains some spoilers, nothing too major though Meet inuyashiki, a salaryman, whose family practically hates him even though he tries his best to please them and to make matters worse, he's got cancer which makes him look a lot older than he actually is. So what happens when he goes for a walk in the park and some aliens crash land to earth, destroy his body, recreates his body into a cyborg? Why of course he decides to save people!! It should come to no suprise that Oku is behind this, the only the author of gantz can pull off something as wacky as this. There's also another guy who is also a cyborg, Hiro. Both of them search for a way to feel human again, Inuyashiki saves people and Hiro kills people. This is quite intresting in the early chapters as it really shows the audience this clash between good and evil. Another really great thing is that Oku tends to make parodies of modern culture and this is cleverly written into the series.  Hiro undergoes quite a dramatic change with regards to his mother and shion (who likes him) and her grandmother. This is quite intresting as he does go through a character change but all this goes to shit when the poilce attack them and supposedly killed shion and granny.But they were still alive and Hiro knew this.......thenn why the hell did he go on a rampage and start killing hundreds of civillians? The event that triggered this rage was the death of shion and granny, so why go attacking and killing innocent people? Basically this made me question the whole point of the second half of the manga, there was no point to it, Hiro and Shion could have just simply left Japan. And why does Shion love Hiro? These half assed romances are nothing new to Oku, just look at gantz. In gantz characters became defined by their romantic intrests and this has carried on into his new manga. She loves him for no reason at all and this was the reason for his change? No, just no. Chapters 74 and 76......Donald Trump shows up. I nearly fell off my seat laughing and he declared the purge LOL The artwork in this manga is underwhelming, its only saving grace is that some of the character models look really good. Here's my problem and one of the biggest reasons why this manga was so hard for me to finish. The backgrounds are just desaturated photographs, I kid you not, it looks so jarring, so out of place. Oku didnt even bother to trace over the backgrounds like other manga artists, he could have just asked his assistants to do that, it wont take longer than an hour to trace it over. But no, he just has to stick as much of these photographs in as possible, characters look so out of place. Another big complaint is odd some of the panel layout is, like some pages are just filled with a collage of desaturated photographs. Another reason to show how lazy this is, when Hiro causes a panic and starts killing off people, normally you'd expect people to be panicking and running right? Nope, because in all of the photographs taken, people are just casually walking about, Oku didnt even bother to edit the people from the photographs out. Overall its an ok manga, I wonder how the anime will turn out, because its source material is meidocre. Would i recommend this manga? Yeah why not, its ok, its not terrible by any means.

Amazing beginning, kinda slowed at the end, had me emotional at the finale. Worth the read, the only reason the rating is a little low is because the art is disgusting LOL.

Well I certainly didn’t realise we could be getting a elderly protagonist in this manga cause there’s always the protagonist being a high school kid doing mischief in the manga world lol. I was surprised to know that this manga had also a MAPPA anime adaption in 2017, although 11 episodes wouldn’t cut the whole manga tbh. Anyways the story was rather a hit or a miss because a lot of things happened that were pretty underwhelming with its contunious kill fest (. I really liked the art though like it was spot on with each characters facial expressions, it was as if they are real life. It was all just so natural! I do wish though that we could deep dive into Shishigami on exactly what goal he was plotting to kill people in the first place. Although flashback tropes are pretty much annoying but in this manga, it was badly needed to give the reader a proper overview on why Shishigami became “the Light alike baddie” in the first place. I felt the author didn’t really focus on Shishigami too much but only the old man. I mean cmon they are both cyborgs like hello? Lol! Yeah this manga is good to read atw if you’re bored as f if you don’t know what manga to read next..... 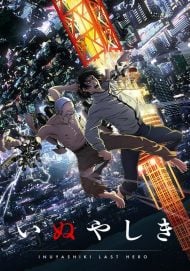