Into the Depths - Reviews 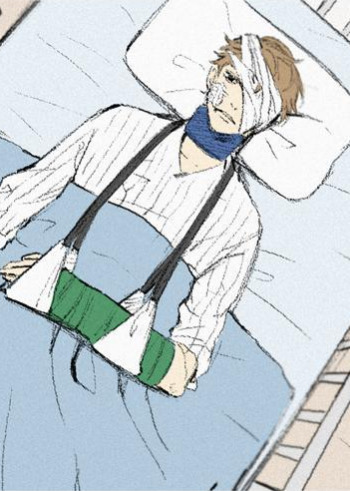 Gosh, that was amazing. After finishing it I am left with such a refreshing feeling.

Story: Two young men with disabilities, Onishi Yuu, and Ishida Kenji. Their disabilities made their high school lives different from other students. The youthful story of the two who build a special friendship!

The bromance is top notch and I got hit with the feels a lot. It's so strange, I read some really depressing shit this week, yet this one disheartened me the most. Season 1 was extremely interesting, I binged it. Season 2, not so much until the last 10 to 12 chapters. Anyway, a beautiful story. (Oh, and it's not shounen-ai, which I assumed. As I mentioned earlier, it's just that the bromance is top-notch.)

Characters: The protagonist, Onishi Yuu, is blind through his left eye (I think it's the left, not so sure which one.) Whereas Ishida Kenji is deaf. Onishi used to be a delinquent, but after an accident, he decided to turn his life around and be a good kid. His development was great and he's such a nice guy, it's so nice-- his relationship with Ishida. Ishida was introverted, and you couldn't blame him for the circumstances he was in. He's so wholesome. Honestly, if I had a friend like Onishi or Ishida I'd be set for life.

The growth between these two boys are too beautiful to behold👌👌. Season 1 gives us the heart-wrenching side shown from Ishida's circumstance, who's deaf since birth. Yu who used to be a delinquent, felt a sense of closeness to him coz he's also been disabled in one eye after an accident. That closeness is what kickstarted Yu's empathy to help someone with similar physical disadvantage... and in the process you can say he completely transforms into a brand new person (tho he's already changed after the accident), Ishida is "transformed" as well in terms of emotional development. It's healing and the author could've left it like that. A large part of season 2 focuses on their uni life, the earlier chapters are okay nothing much... it's the last few chapters that show Ishida fully grasping the meaning of things he used to perceive seriously, like having him extending a hand to help Yu, and he himself affirming that friendship isn't one-sided... that's his emotional growth right there matey.

It was very good, the art was good, story was good, characters were good, good

It is a manga, which warms ur heart. Story is fluent with good knots and sidestories. Character growth is also good and satisfying to watch. On the whole, it is good manga, which is interesting and u definitely wont regret giving it a chance.

Just be aware that this isn’t a BL folks but it’s more of a friendship growth type of story between two Bois who both have a disability.

Kenji is deaf and Onishi is blind in one eye when he was involved in a accident by Truck-Kun during his delinquent days. The guys didnt get along at first so the teacher makes Onishi become friends with Kenji until graduation. Kenjis story is really heartbreaking because his single mother hits him on a continuous basis and he can’t defend himself. I was glad that the guys really warmed up to each other so that Kenji could happily live on with his life.

I will say the near end was boring when they went to uni but the ending is decent enough. Btw I found out about this through 15 Best Slice Of Life Manhwa For Fans Of Manga on CBR!