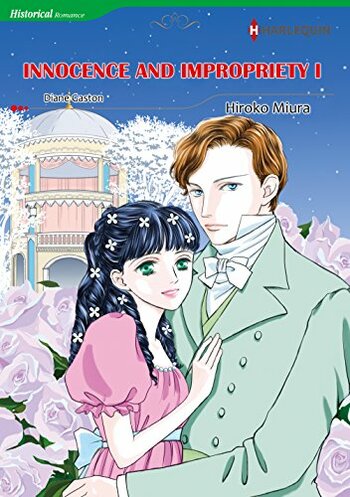 Kabe no Hana: Hishoyaka na Shoka no Yoru no

Four young ladies at the side of the ballroom make a pact to help each other find husbands... no matter what it takes. Proud and beautiful Annabelle Peyton could have her pick of suitors—if only she had a dowry. Her family is on the brink of disaster, and the only way Annabelle can save them is to marry a wealthy man. Unfortunately her most persistent admirer is the brash Simon Hunt, a handsome and ambitious entrepreneur who wants her as his mistress. Annabelle is determined to resist Simon's wicked propositions, but she can't deny her attraction to the boldly seductive rogue, any more than he can resist the challenge she presents. As they try to outmaneuver each other, they find themselves surrendering to a love more powerful than they could have ever imagined. But fate may have other plans—and it will take all of Annabelle's courage to face a peril that could destroy everything she holds dear.

Lady Aline Marsden was brought up to marry a man of her own class, but from the moment she meets John McKenna, she risks everything to be with him. Although their love is forbidden, McKenna's passion for the beautiful Aline is too compelling to deny. When their secret is discovered, their world is shattered. McKenna is forced to leave forever, unaware that the only reason Aline has given him up is to save him. Now McKenna has returned, a powerful man determined to take revenge against the woman who broke his heart. But the magic between them burns as fiercely as ever . . . and as McKenna uncovers Aline's deepest secret, together they discover a love that will defy Fate itself.

Emma and the Earl

Emilia, the only daughter of a rich family, falls in love with the charming, poor aristocrat Dominique. And he cared for the awkward Emilia, as well. However, once she found out his goal was her fortune, she declined his proposal. After, falling upon hard times, Emilia left the high society scene. Changing her name to Emma and working as a tutor, one day, she receives a work request from an earl...

London's rugby stadium is filled with excitement as it honors the gorgeous prince of Santaria, Prince Casper. While everybody else is having fun, Holly's mind is elsewhere—her fiancé broke up with her the night before. She is so upset that she starts to cry while serving the prince. Somehow the prince starts to comfort her and whispers sweet things into her ear. Holly is too distracted to realize that there are cameras pointing into their room. Holly has no idea of the scandal she has landed in!

Kit Smith, honoring her father's dying wish, has moved to London to pose as the niece of Rose Singleton, a member of the ton. Kit can't imagine what influence her gambler father exerted to bring about Kit's introduction into polite society. Hugo Devinish, a second son, went to sea as a cabin boy and is now a prosperous merchant and ship captain. He decides to attend a party in town to check up on an heiress that his young nephew is courting. Meeting Hugo at a party, Kit wonders why he wishes to dance with her—until she overhears him explaining his mission to a friend. Kit muses that they must be talking about her. So, the family watchdog has been dispatched to investigate her, eh? Kit thinks it's not very charitable of him to describe her as "a chit with more hair than conversation." But more than that, she wonders why he thinks she's an heiress? Still, if he wishes to dance with a simpering simpleton, she can well oblige him!

After a year at war, Captain Ivo Trenchard returns to England to visit his beloved aunt in Somerset. He survived the throes of war unscathed and now, to his chagrin, he’s bedridden for weeks because of a simple animal rescue gone awry. Luckily, the local tomboy Jossie Calverton Morley suffers from a guilty conscience and visits him every day, ensuring he’s never bored. But what’s the brave captain to do when this enchanting innocent suddenly begs him to teach her how to kiss?

The Earl and the Pickpocket

After her father died, Edwina’s uncle was determined to marry her off to a strange earl. Without any other options, she decided to dress like a boy, run away and call herself Ed. But out on her own, she fell into the hands of a man who forced her into pickpocketing on the streets of London. One day she’s saved by a handsome gentleman named Adam and taken to his mansion. When Adam sees that Ed is actually a beautiful woman, he’s surprised at first but, taken in by her charms, he decides to make her an offer…

Ever since her father died, Elizabeth had been ostracized by London high society because of the unfounded rumors that she is a loose and vulgar woman. But she had one friend who believed her—Terry. In order to protect her reputation, Terry even proposed to her! Terry's uncle, the Earl of Havington, flew into a rage when he heard of the proposal and confronted Elizabeth, giving her a terrifying ultimatum. She must disappear from Terry's life or the earl will take any measure necessary to make her disappear.

Prisoner of the Tower

It's the social season, and 17 year old Emma heads to London, with her family's hope of finding a rich husband weighing heavily on her shoulders. One night, a mysterious man approaches her. A refined handsome face, curly black hair and deep blue eyes... Emma falls in love at first sight and shares with him her first kiss. 12 years later and now a widow, Emma visits the Earl of Greyston to discuss the marriage of her stepdaughter. It is the Earl's younger brother who is betrothed to her stepdaughter, but the Earl never shows himself. While staying there, Emma spots the man she kissed all those years ago in a portrait on the wall...!

Emily was so happy to have married her first love, Adrian, an earl. But after the wedding ceremony, he went to London and never came back. And then one day, three years later, her husband’s cousin comes to see her, saying that unless she gives birth to an heir, her husband’s lands and title will become his. Without thinking, Emily blurts out, “I’m carrying the earl’s child.” Now that she’s said it, she’s going to have to make an heir in a hurry. So Emily heads for London, knowing she’s unwelcome there, and is shocked when she discovers the real reason her husband hasn’t come home.