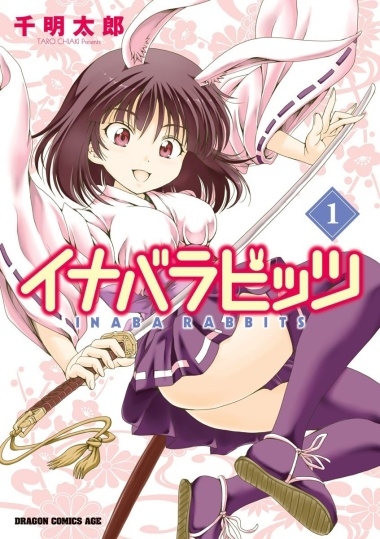 Both of these series center around a group of young shrine maidens with mysterious origins and intentions, and a similarly young guy who appears one day and is revealed to be someoene special to their group. In both stories the shrine maidens then begin to compete over the affections of the guy, despite having originally been dismissive and rejecting him. Umi no Misaki takes a more serious approach while Inaba Rabbits takes a more comedic approach, but both feel very much alike.

Wataru has a hard time remembering his childhood. His parents divorced and since then he has done his utmost to relieve his mother of her burdens. On the first day of school his past catches up to him in the form of three childhood, female, friends whom each want to marry him... Oh, and the neighbor girl has the hots for him too.

Urashima Keitarou is a loser. He's failed the Tokyo University entrance exams two years in a row, and his parents have finally kicked him out of the house. Penniless and destitute, he travels to his grandmother Hinata's inn, hoping she'll put him up until he can get into Tokyo U and fulfill his promise with his childhood sweetheart (whose face he can't even remember). Unfortunately - or perhaps fortunately - it turns out that the inn is no longer an inn...  it's an all-girls dormitory, as he discovers in his typical blundering fashion by grabbing an eyeful and more of every girl in the place!  Narusegawa Naru, a fiery-tempered high school student and the first victim of Keitarou's lewd bungling, wastes no time doling out brutal punishment and preparing to kick him back out to the street.  But wait!  A letter has come from grandma Hinata, and Keitarou is to be the dorm's new live-in manager!  Is this a blessing from heaven, or has he been cursed to a living hell?

Kaguya is in a bind. His mother has decided that he will attend Anju Gakuen, an all-girls' school for monsters, but there's a catch: he's not a girl, and he's not a monster! As humans are eaten if discovered, Kaguya must wear his skirt and try to blend in with the population of werewolves, demons, foxes and spirits, but it won't be easy. He's forced to room with Hakubi, a nine-tailed fox who secretly only has seven tails, and numerous supernatural beauties are out for his hand in marriage. With his secret leaking to more girls and nudity abounding at every turn, will Kaguya manage to survive his time in Anju Gakuen?

When Hideto, a high-school student who is afraid of women, is suddenly targeted by a beautiful older woman whom he believes to be a molester, he runs for his life. Mid-pursuit, he is attacked by what he previously believed to be an illusion, a blur that nobody else could see.