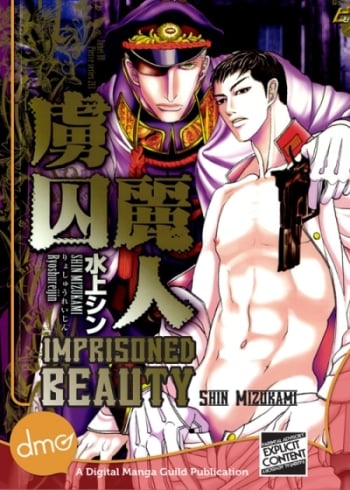 Hisoka is the caretaker of a rich man's vacation home now that his father is in the hospital. After many years away, his employer has returned, but he is now in a wheelchair, and wants Hisoka to sleep with his wife.

Yanagi and Ibuki are bankrobbers. During one "job" they injure a police officer and his enraged partner Matsuba comes charging at them without a second thought. They take him hostage and Yanagi wants to make him his own sex slave, while Ibuki starts to develop feelings for the hostage.

Your regular run-of-the-mill bank employee rethinks his definition of "happiness" when he's taken hostage by a bank-robber.

Betrayed and robbed by his friend after arriving in India, Maya is left for dead in the middle of nowhere. As he's lying on the ground half conscious, he sees a white tiger that whispers, "Raton," and then transforms into a beautiful green-eyed man with long black hair who kisses him and then disappears. Caught by strange men after frantically searching for his false friend and belongings Maya encounters his mysterious apparition again but this man, Maharaja Vishuvendora, doesn't have black hair and green eyes. While sheltering at the Maharaja's compound who should Maya encounter wandering the grounds but his mysterious black haired Raton. Thus begins another exotic offering from Tamaquis-sensei.

Love-affairs between the members of an army team, the Seal. The main characters are Jim and Roy, of whom Roy is the captain of the team. Although he acts quite tough, inside he is very weak and suffers from several bad experiences in his past. Then there is also the young Cyril (?) who happens to be very self-destructive.

A morbid second Young Master of the mafia meets an amateur psychologist. Swept along in darkness, tyrannical abuse and depredation, he destroyed his life. In the end, none of us could save anybody…

Gerun Fortress – a coastal stronghold along the Mediterranean Sea. Here, two-hundred Monastic Knights make their final stand against a league of 20,000 Middle Eastern soldiers led by General Jamal Jan. Called "beardless" by some, "shameless" by others, Jamal soon seizes the castle and its acting commander, Prince Leonard de Limbourg. The general's ideas of how to subjugate the enemy do not conform to the typical rules of warfare, however. In quick order, Prince Leonard finds himself stripped naked and forced to perform in front of his own men. Leonard's humiliation does not end there; now the general's captive slave, he is brought back to a strange land and presented before His Majesty the Sultan. Will Jamal's deviant attentions lead to certain punishment for both he and Prince Leonard?

When a roguish samurai embarks upon a mission to rescue his brother from the clutches of a fiendish feudal lord, he himself becomes a pawn of the debauched villain.

On his way to work, Shimizu, a systems engineer, faints at a train station because of his strenuous job. As everyone pretends not to see him, the only person to call out to him is his elementary school classmate, Suzuki. But when Shimizu wakes up for the second time, he discovers that he has been imprisoned in a strange place and has been undressed and violated by Suzuki, who he expected to be humane! "Looks like you get more excited when you're tortured."

Suou Hozumi is the over protected heir of the Suou family. His grandfather barely lets him out of the house, so when an accident brings suave Kanzaki Shougo into Hozumi's life, he can't resist the appeal of the kind older man. But innocent Hozumi has no idea what his new friend is capable of...