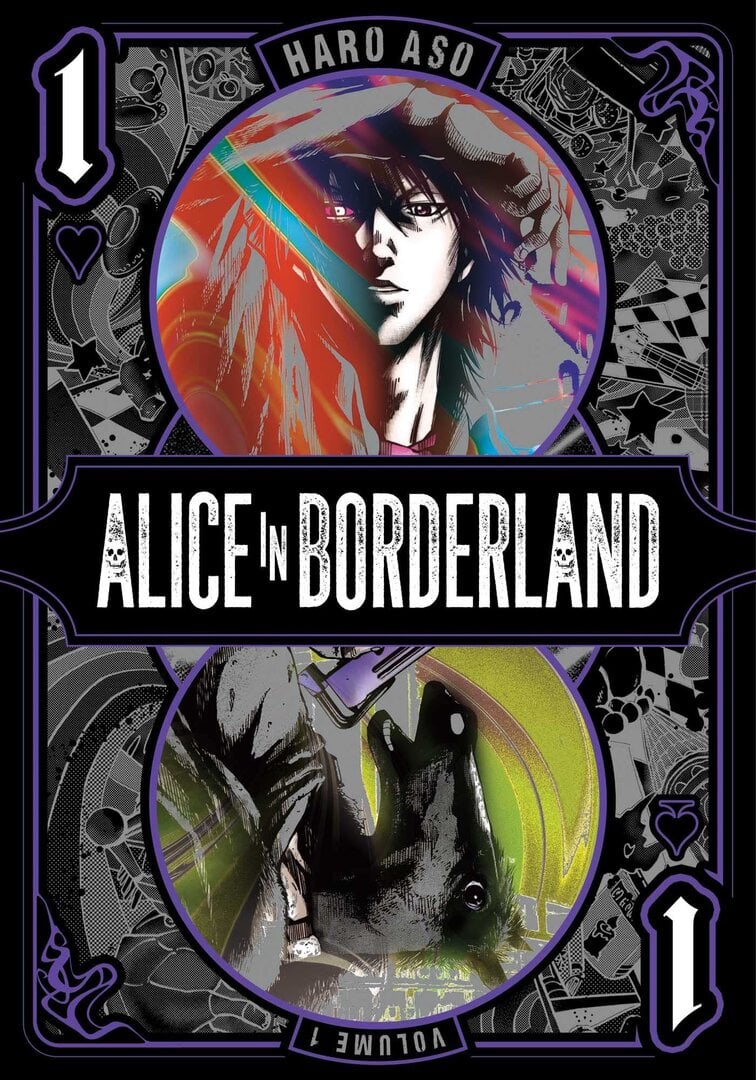 Alice Ryouhei will leave high school soon, but he's trying to avoid thinking about his future. Late one night, when he's hanging out with his tough friend Karube and his silly, girl-crazy friend Chota, they see fireworks. After one blindingly bright explosion, they find themselves waking up in a different world. In this 'Borderland,' people are forced to either participate in potentially deadly games or simply die. Will Chota, Karube, and Ryouhei be able to survive this dangerous new world, and is there a way they can get back to their original lives?

Story Summary Alice in Borderland is about a group of friends waking up in a post-apocalyptic Tokyo, called the Borderlands, after witnessing some strange firework show in the middle of a night. After their initial joy their adventure quickly turns into a nightmare as they are forced to play deadly sadistic games in order to prolong their visa. Because once their visa expires they are shot by mysterious beams from the sky. Review A simple concept where the main characters have to play games in order to survive all while trying to discover a way back to their normal lives. But following the journey of the main character, Arisu, is anything but simple. It is not only a journey through the borderlands but also a rollercoaster journey through his emotions as he grows from a scared teen into an analytical and mentally mature man. This journey is not without many setbacks as he often is pushed into desperation where is has given up on life but multiple times he will overcome those obstacles to come out of them as a stronger person. One particular chapter I liked a lot was the flashback/recap at the start of chapter 53 where Arisu was rethinking about all the previous events. It showed perfectly the rollercoaster he was on. ''Is it weird I’m excited?'' ''I want to go home'' ''WE ARE ALIVE!'' ''What does it mean to live?" ''It feels amazing to be alive!'' ''I don’t care...what happens anymore''   Beside this character growth the games are also intelligent and every time they become more sadistic and gruesome as the previous games were. Games are split into four categories: spades (physical), hearts (psychological), diamonds (intelligence) and clovers (balanced/teamwork). But even physical games requires you to use your brains and come up with strategies. My favorite are the game of hearts where they destroy your mental health by giving you false hope and crushing it afterwards. The Queen of Hearts was my absolute favorite as it messed even with the reader’s minds. I can't reveal much because of spoilers but the way it gives the readers false information about the plot only turning out to be something else. However that game did make the ending a bit anti-climactic for me personally. The ending was good, but not as interesting as the game Queen of Hearts was, I would have loved any of the Queen of Hearts possible game endings. But instead it had taken a rather abrupt semi-supernatural ending which was not supernatural enough to blow me away and not something ordinary enough so it makes me believe it can happen in everyday normal life. Instead it left me with ''hmm, I guess that’s also possible''. Art The art was nothing special in my opinion, it did improve over the course of the manga but it wasn't mind blowing, good, definitely not bad, but not great either. The only thing that did bother me was the scream of despair Arisu made in the 7 Hearts game where his face, specially mouth, was a bit weird. It reminded me a bit of such cartoonish wolf whistling at a pretty lady like the wolf which was drawn on his headset. Since that scream re-appears in flashbacks in later chapters that particular slightly out of place art style is even more noticeable compared with the better art on the later chapters. Characters The manga puts the main focus on Arisu's growth, there are a bunch of side characters but they never made a strong enough impression to be viewed as major characters. Even Usagi remained in the sidelines even being passed by some of the villains. Usagi could have been a great opportunity but instead she became a forced motivation for Arisu. Tiny spoiler.... their romance felt rushed. I loved when they first met and they could relate with each other because of their similar past, but it felt rushed how it went from a shared past towards ''I will sacrifice my life for you'' in the short period of time.  The side story characters initially not very interesting but the way they re-appeared throughout the story up until the ending where all side stories got tied in and came together, was nicely done. Also, the growth of the villains was rather interesting as you discover along the story they got more in common with Arisu as initially thought with even some villains turning around. Overall  You shouldn't be deterred by violence because this manga has a lot of it. And if you like dark manga filled with despair and gruesome but intelligent/mind breaking games this will be something you will love. This is definitely something I could see myself reading again or even buying because I love play and die situations and dark manga. 9,5 / 10 rating

With 65 chapters, you would expect more contrived and repeated plotlines, but the author remains innovative and true to the theme with each progressing chapter. If anything, the story becomes increasingly interesting after chapter 11 (the Wolf and Sheep game). The characters and character development are top notch, each grappling with their own reasons and methods to survive. This is the only survival game manga I've seen tackle the psychology and nuances of life and death so well, and still have a strong ending that ties everything together. I'm reviewing a manga like I'm writing a goddamn academic film review, but it shows how much I appreciate the quality of this work.

NOTE: I'll probably come back to this review at some point and edit my scores to be a bit more realistic, but I just finished binge-reading this comic and I'm still spinning from the crazy-ass wild ride I just went on. TL;DR - This has got to be one of the better mangas I've read in a while. I have a lot of 5-star mangas in my reading and read lists, and they're all rated highly because they're very entertaining, well-drawn, etc., but this one is on an entirely different level. It's gut-wrenching, sad, satisfying, angering, etc., all in one. It's one of the few mangas that's probably made me feel every emotion I can think of feeling, and it's one of the very few things out of all mediums (manga, anime, video game, anything) that's made me think about my own actual real life.  It's not a light-hearted read, and it's definitely not for someone looking for happy-go-lucky, funny romance. Be advised. STORY - The story overall is very good. The buildup of events and how everything ends up tying together is done quite well, although there were (VERY occasional) sparse dots of plot convenience here and there. The games they end up playing are all very interesting and very creative. Because of how unique some of the games are, it's actually a fun read for intellectuals in terms of devising strategies for winning. But at the same time, it doesn't go hardcore genius-strategist on you either, so it's still at a level where non-chess champions can understand and enjoy it. Alongside the character development, everything simply builds very well. ART - Art is great. I never felt like at any point any of the characters or buildings/props were badly proportioned, and shading work as well as level of detail is excellent. I think the only other manga I've seen that is nearly or as good is probably Grand Blue Dreaming (which you should check out purely on the basis of artwork, by the way). CHARACTERS - The main characters who were important were done pretty well. They had great back stories and you get to really, really know the characters and understand their mentalities and their reasons for their choices, which is something many other stories, animes, manga, and multimedia in general sorely lack. Characters don't do evil shit "just because", and that's really refreshing in the world of shounen manga. I also want to comment that it was a little weird to me how this was in the Shounen manga category, as I certainly feel it would have been slightly more appropriate in seinen. But whatever. My only beef with the characters is that there are a few here and there that didn't have the same depth and level of attention as others, and although you obviously can't have 20 main characters, it is my opinion a few of the ones the author decided ignore needed the emphasis. OVERALL - A highly enjoyable read. It's one of those ones that keeps you clicking the 'Next' button over and over until you realize it's 3AM and you have work the next day. If you like mangas that have lots of action and violence, lots of examination of the human condition and what it means to be alive, lots of relatable characters and great plot development, this manga is for you. 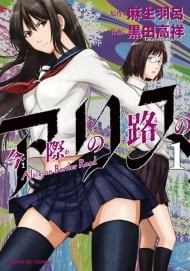 Imawa no Michi no Alice 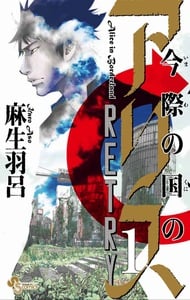 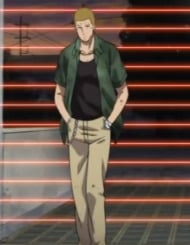 Imawa no Kuni no Alice CM 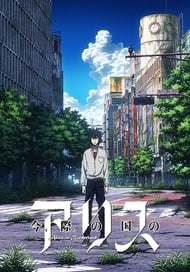