I'll Make You Hate Me - Recommendations 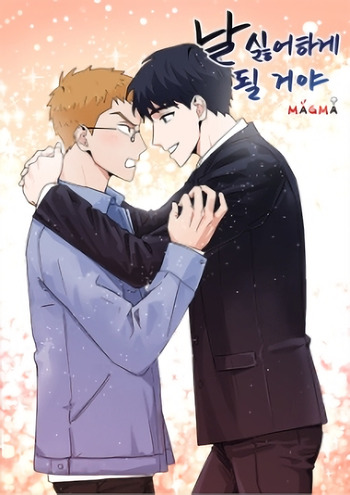 If you're looking for manga similar to I'll Make You Hate Me, you might like these titles.

Kyuyeon has an alternative persona in the online game, he pretends to be a female player with a character named “Yorong” only to rip off items from other clueless users. One of “Her” diehard fan named “Yeommin” showers Kyuyeon with gifts day and night. He’s happy but at the same time, Kyuyeon feels a bit pressured about Yeommin because he’s always asking “Yorong” for a date. To top it all, Kyuyeon finds out that Yeommin is his handsome classmate Kimin Yeom. How is he going to get out of this trouble?

If you liked Candy Man or I'll Make You Hate Me, you would also like the other because both have similar plotlines, among other reasons.

Heesu’s world revolves around Chanyoung, his best friend and secret crush. He doesn’t mind cheering Chanyoung from the sidelines or listening to all his girl problems. He doesn’t care if people only know him as “Chanyoung’s friend.” Then one day, Heesu starts hearing his name everywhere. On the bus, in the halls, during lunch… Turns out, there’s a rumor going around school (Got a love problem? Find Heesu in Class 2 and he’ll tell you what to do!) and with that, Heesu suddenly finds himself the center of attention. But how could he give anyone advice? He doesn’t even know what to do about his own crush!

Jin and Junghyeok are childhood friends, but they have been in a cold war for years! What happens when their souls swap? One day, both of them found their old name tags from middle school and went to bed with old memories in mind... to wake up in the body of the one that they hate the most! How will they deal with day to day life? Is there a way back?

Till Our Lips Touch

Sebastian Jung was the hottest teacher, that is, until Isaac Han arrived. Tall, intelligent, and beautifully brooding, Isaac has it all and Sebastian knows this all too well. In the past, they had shared a sultry after school romance. Now, Isaac is back. Can Sebastian resist falling for Isaac again or will his lips yearn for his touch?

A drink with friends leads to Zack waking up bound to a chair and blindfolded in the middle of nowhere. Was he captured for organ trafficking?! Is he being held for ransom?! No. When the blindfold falls and he finds his rich, enigmatic, friend Julian is holding him captive, Zack will soon discover he is being detained for something else entirely...

This is a past that he thought that both of them didn't want to mention. But when Lin saw his childhood friend Yin, all comes to his mind. Will he forgive me or want me get lost?