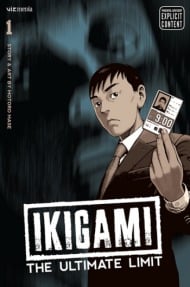 Dear Citizen: Thank you for your loyalty. You've no doubt noticed that the world is a troubled place. People are apathetic, lazy, unmotivated. You've probably asked yourself "why isn't anything being done to stop this systematic decline"? Rest assured that measures are being taken. Beginning immediately, we will randomly select a different citizen each day who will be killed within 24 hours of notification. We believe this will help remind all people how precious life is and how important it is to be a productive, active member of society.Thank you for your continued attention and your cooperation and participation... CONGRATULATIONS! YOU HAVE BEEN RANDOMLY SELECTED BY THE GOVERNMENT...TO DIE IN 24 HOURS!

I've written a very short review for Ikigami which should only take a minute or two to read. As a quick side note, I just want to say that it is very difficult to rate a show on a 1-10 scale. Whether or not a story has good Art can be extremely relative because series such as Dragonar have incredible art, but only because they prefer those designs over something like Death Note. This book is not for everyone and may make you depressed, especially if you do not understand certain fundamentals of Existentialism that come off as pessimistic but are actually very hopeful. Such is a book like this. Here is my original Review for the school Newspaper and no, my school doesn't do a lot of anime/manga reviews, I actually haven't submitted it to the paper yet, but eventually will. Short and sweet: Ikigami: The Ultimate Limit is a story set not too far in the future in a country where children get an immunization upon entering the first grade, but one in a thousand of these immunizations carries a nanocapsule which kill the child between the ages of 18 and 24. These unlucky citizens are given a 24-hour notice before their death in the form of an Ikigami or death papers. Our main character, Kengo Fujimoto, is tasked with the job of messenger in which he delivers the Ikigami to the respective citizens. Essentially the heart of nation's government, the National Welfare Act is charged with handling the Ikigami and the immunization. They hold those that receive the Ikigami in the highest regard by recognizing their deaths as being for the good of the nation, claiming that such an act is used to remind citizens what it means to live. The story is told in an episodic manner following the lives of those who have received an Ikigami. It portrays a more Existential point of view on life with the line “Where is the value… in a life in which you can’t take responsibility for your own existence?!” Whether or not you see yourself as an existentialist, Ikigami: The Ultimate Limit presents people with their own problems, their own passions, and their own desires. These stories range from various types of artists such as musicians, dancers, painters, and filmmakers to enforcement officers, store clerks, nurses, etc. This story finds one way or another to connect to the audience. As silly as it sounds, this is the first book to ever bring me to tears, which leads to the manga’s biggest weakness that is the fact that the story may be sad or depressing for many readers. Without spoiling too much, other than the story’s mediocre ending, Ikigami is an incredible piece of artwork. At one point in the story, a panel takes up about three-quarters of the page and presents the face of one of the unfortunate people who received an Ikigami, laying down, staring up at the ceiling as if looking into an abyss. While here, the character is covered in tears, when you turn the page, on the same side, we are presented with a similar drawing, but of one where his tears are dried up and he is once again staring at the ceiling of his room. Ikigami isn’t just a graphic novel that tells a compelling story, but a piece of art using all elements of the the graphic novel medium, such as its art style and panel placement to represent isolation, beauty or happiness. Graphic novels don’t just have to be recognized as work only meant for ninjas or swordsmen to fight in a cool fashion, it is a beautiful medium wonderfully made and enforced in a short series such as Ikigami.