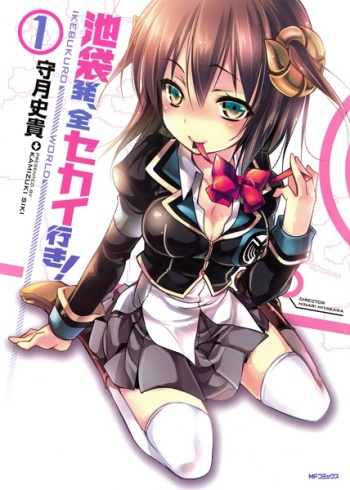 When Haruhi Suzumiya introduces herself to Kyon by asking if he's an alien, time traveler, or psychic, he knows his chances for a normal high school experience are ruined. Bold Haruhi takes a shine to him, and uses the force of her irrepressible personality to draft him into her club to find paranormal beings. Kyon soon discovers what she's looking for: Haruhi herself has the power to destroy and create entire universes at her whim. But if she knew about her ability, it could spell disaster for everyone.

Both series revolve around a hyperactive girl who pulls this normal guy into her crazy antics. The two of them are joined by a bunch of (mostly female) odd friends. Those characters are quite similar between those two series (most likely one was inspired by the other). The key differences would be that Kebukurohatsu, Zensekai Yuki! features more fanservice and lots of otaku related content, while Melancholy of Haruhi Suzumiya has those supernatural things going on. If you read one and liked it, you might  as well try reading the other one too.

Eri Inui is a 20-year-old college student aspiring to become a mangaka. She has been following this dream ever since she was little and has been the best artist among all her friends. But she still hasn't found a publisher willing to take her under her wing. One day, however, Souta Inusaki, the son of a distant relative, comes to live with Eri and her mother. Souta is an aspiring violinist and has come to Tokyo to practice. Eri sees a lot of herself in the young Souta. But how will she deal with a 13-year-old boy following his dreams and going through puberty?

Dreaming of becoming a popular manga artist, Urashima-kun enters a manga school called “Tokyo Manga Academy”. With a mixture of hope and anxiety, he takes his first step into the world of manga creation… where he encounters all sorts of strange characters! A former delinquent who loves Yaoi, a beautiful but sharp-tongued teacher, a high school girl who throws herself on the ground to apologize, a French history buff…This is a tale of manga school life, that illustrates the youth, the successes, and the failures of manga school students!

The shy girl, Ninose Shizuk, is a high schooler who makes a living out of drawing adult oriented manga. Every day, in order to survive, she puts her heart working on it, until she encountered a certain problem...

Miyazaki Nagi hasn't been able to make it as a mangaka. On top of that, his editor changed recently. After returning home one day, a depressed Nagi opened his door to find... a beautiful, dark brown woman in her underwear?!