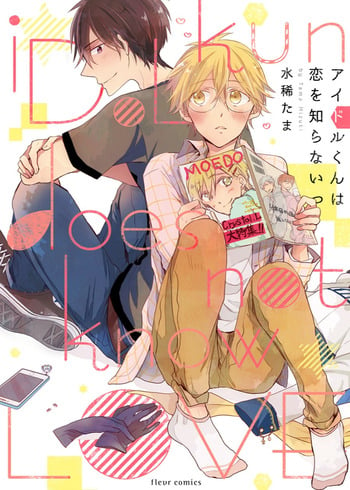 If you're looking for manga similar to Idol-kun wa Koi wo Shiranai, you might like these titles.

Ayukawa is a hot up-and-comer in the flashy world of celebrities...but he pales in comparison to the superstar Mizuhara! It’s impossible to pass a newsstand or television set without seeing Mizuhara’s perfectly chiseled features or delicious body. So, when Ayukawa agrees to a special “transaction” involving his incredible idol, he figures it’s just part of his rise to the top...but is there something (or someone) lurking behind the velvet curtain?

On the special stage where only the chosen one can stand. At that time, we were both there. And there, we fell in love.

Yori, the leader of the idol group “D.BUG”, and his ex-manager, Mikura, are dating in secret. The company president had approved of their cohabitation and their shared lives were smooth-sailing until one day, Yori gets selected for a stage play by the famous stage director, Ogami. Ogami discovers Yori’s potential as an actor as Yori begins to immerse himself in Ogami’s play. Watching the relationship between these two develop, complicated feelings start to take root in Mikura’s heart...

Maxime is Japan's top pop group right now, gaining fans everywhere. Mari and Kyouhei are idols, band mates, and sex friends... or is it more than that?

Miroku Osaki is 36 years old, unemployed, and unhappy. Having been bullied in his childhood and even into his adult life, he became a shut-in after being unfairly laid off. For a long time, the only thing that brought him joy was online gaming. Then, he tried the popular idol game called "Let's Try Dancing!" It was addicting... and transformative!  Inspired by the game, Miroku decides to turn his life around. He begins singing karaoke and going to the gym, where he meets Yoichi, the director of an entertainment company who encourages Miroku to pursue his dreams.