I Wanna Be Your Girl 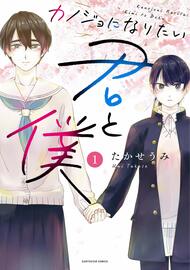 Hime Sakuragaike has secretly been in love with her childhood friend Akira Yonezawa since they were kids, but Hime only recently found out that Akira identifies as female. Although surprised, Hime offers her full support, and this is initially kept secret between them for a few years, but Akira decides to start living as a girl full-time upon starting high school with Hime. However, since Akira garners a certain amount of attention, Hime takes it upon herself to aggressively stick up for Akira whenever necessary. Not wanting Akira to be singled out as an object of ridicule, Hime decides that her only option is to put herself in Akira's shoes.

917 users are tracking this. Log in to see stats.

**SPOILERS AHEAD, READ THE WHOLE MANGA FIRST BEFORE READING THIS REVIEW** Man I’m so effin dissapointed that Akira and Hime didn’t get hitched like f sake, I was hoping they would rekindle on their relationship but Hime had to marry the “good looking guy of the school”. I mean I am so beyond disappointed that I had to wait for this friggin manga to finish and the ending just didn’t exceed my expectations…. I really am dying for a for real TL manga cause there’s hardly any out there!

A good manga that explored LGBT theme in school setting. Reminds me a lot to Shimanami Tasogare but has lighter tones to the story.Keywords: LGBT, slice of life, coming of ageReps: trans girl, pansexual, lesbian, asexualTrigger warning & content warning: misgendering, homophobiaREVIEWKanojo ni Naritai Kimi to Boku or I Want to be Your Girl tells about a young teenage girl named Hime who fallen in love with her best friend, Akira. The story revolves around Akira's experience as a trans girl, Hime's support to Akira and how Hime trying to figure feeling and sexuality, as well as the friends they made along the way.The casts are quite diverse and inclusive. And the author handled LGBT themes with such a care. It's lighter in theme compared to Shimanami Tasogare but still good in its own way. This is a series that will give you warm, wholesome feeling after you finished it. The reps are quite good too. I wish the story will give more screen time to Akira, though.

I never once thought in my life I would rate a manga or anime with a perfect score. I was considering marking the characters as a 9 maybe and giving the overall score 9.5 out of 10 or something, but there's so much growth in all the characters I couldn't help but give it a 10 for everything. Now on to the actual review This manga has a truly realistic experience of being transgender. The hardships, pain, joys, challenges, and what not that come with being a trans person who is open about themselves. Akira is a wonderful girl. She's kind, naive, full of love but not without insecurities. She just wants to live as her true self, but in today's society that can be really difficult. However with the help of her friends, and especially of her childhood friend, Hime.A heartfelt, emotional, positive, and thoughtful story. I truly reccommend reading it, especially for anyone who wants to learn more about what it's like to be transgender, anyone questioning their gender or place in life, or any trans folks out there who want to see good representation. I loved this manga so much I read it all in one sitting and I'm writing this immediately after having read it since I noticed there were no reviews on here for it. ------ Please bare in mind that there will be spoilers beyond this point ------ First thing is that this cast is really diverse. There's so many different facets of the LGBT+ community in this story. They have a strong, older sister like lesbian... An Aromantic teacher who cares for his students like his children.. A bisexual girl in love with her friend since childhood.. And a trans girl full of courage and love..  The story builds off of Hime's feelings for Akira, and akira managing her place in the world. Hime has such strong feelings for Akira, even outside of her romantic feelings, and both her and Akira learn so much about themselves throughout the story. Along with the helps of a quirky and loud girl named Anzu, their sisterly friend Yuuka, and a kind cross-dressing man named Hiro, they explore their feelings, their anxieties, and their struggles with living in a world that might not fully accept you. Whether it be because you fit outside the norms of society, your gender, who you love, everyone faces challenges.  I wanna be your girl represents LGBT+ people with a really realistic lens, without making transphobic "men in a dress" ""jokes"", or making fun of any of their characters for who they are, unlike a lot of other LGBT+ geared manga I've read. I know that as a trans person, or a lesbian, bisexual, whatever, that of course we're going to face hatred, we're going to be belittled and hear ""jokes"" and be treated poorly by bigots... and while yes the manga does show some of that, the story never once treats their characters like they are lesser, or that they are wrong just for existing and being who they were meant to be. There's even a gay wedding at the end! Though I won't say with who.  ------ No more spoilers! yay! ------ The good of this manga: Realistic characters who were interesting to read about. Nice story pacing and overall story in general, 10/10 made me cry multiple times. Interesting character growth.. No one felt like they were stagnant [outside of side characters we barely see, but even some of them had a lot of growth!!] A charming art style Great LGBT+ representation without any transphobic or homophobic ""jokes"" The bad of this manga:  IT SHOULD BE JUST A LITTLE BIT LONGER It felt like there was a bit too much emphasis at times on how poorly people look at trans people. This one is just my personal feelings probably, but I really wish there was a better look into their family lives. I'd especially like to know about Anzu and Yuuka's family, even just a little. Being "different"... your family plays a huge role in how you navigate the world, and I just wish the manga touched on that a little more.