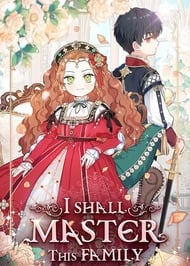 The great Lombardi family was once at the top of the empire. After the death of its patriarch, the fate of the family and that of Firentia, born from a Lombardi and a peasant, fall to ruin at the hands of her useless and cruel cousins. But when she’s reincarnated as her seven-year-old self, she’ll work to protect the family’s honor, gain her grandpa Lulac’s favor, and prevent her own father’s death. In this lifetime, there’s only one way for her to win: become the head of their mighty household.

The protagonist Tia is focused on becoming the head of her family. The story is quite like other "Reborn" stories, but it's different that she isn't trying to get revenge or achieve her goal for any sad/dark reasons. She just wants to help her family be strong... because she loves it. Simple as that. Tia sets up everything wisely: she forms relationships with the right people and says the right things. That's expected of the FL of this type of webtoon, but it's still enjoyable to read nonetheless. The father loves his daughter, and the father-daughter relationship is cute. It isn't the overly cutesy relationship where the father dotes on his daughter and is overprotective. It's the sort of above-average loving relationship in a normal world. So I really liked their dynamic. The protagonist seeks to achieve her grandfather's, the head of the family's, recognition in a way you'd expect in reborn stories. She shows off her intelligence and the grandfather and his aid react as expected. They take note of her and recognise her talent, though not to the unrealistic point where they gush over her. Additional note: I love the grandpa. He's so wise and powerful. The brothers are morons. In this life, she's more assertive, so it's satisfying to see her deal with them (not to the point of b*tch slapping style). Everything in the story is done quite moderately... almost like the characters are real humans! That's something I liked to see in the story. As for the romance... The first chapter briefly shows their happy ending, so it sets up the expectation of their relationship. FL has met with ML the first time in chapter 25 and helped him (spoilers, so I won't say much). ML is in a horrible situation right now, and FL does and says encouraging words that become ML's guiding light. ML has been mentioned a few times after that. They meet again in chapter 46 and he's saved! Tia's doing what she can to help him, besides helping her family! The art is lovely to look at. I really like how the artist draws the lighting of the eyes to create a certain effect.  Overall, I look forward to the next chapters. I expect this would be an adventurous semi-light-hearted story with a happy ending. It's the sort of isekai webtoon where you expect certain things to happen, but when they do you're still pleasantly surprised.

So, I've just started reading this, but I really like it This review is long, but please bare with me Story      The story is about Florentia, a girl who has lived two times already. Dying from truck-kun makes her first life come to an end. She then reincarnates as the illegitamate child of the richest family in the empire. Since it's a rich family, everything should go well, right?      That's what Florentia thinks as well, before she soon realizes that is not the case.      She is treated differently because she is an illegitamate child, and the treatment gets even worse when her father died. Tia works hard to gain the recognition from her family, and it pays off when she becomes her grandfather's buissness assistant.      While on his deathbed, her grandfather says these words to her,      "If only I'd known that you had those abilities, I would have left this family to you."      After her grandfather, the family soon kicks her out, saying they've had enough of putting up with her, an illegitamate child.      Two years later, all of Tia's efforts end up in vain when she finds out that all the expenses for the Lombardi, the family she had worked so hard to prove herself to, have all been spent.     When Tia comes out a bar to drink her frustration away, she accidentally trips and falls to the ground. Unbeknownst to her, a carriage is heading straight to her!      And just like this, her second life comes to an end.      If that's true, why is she sitting next to her father? And why is she so tiny? Tia's third life starts, and this time, she'll become the Matriarch in this life! Art      The art is really amazing. It's similar to other types of art, but that doesn't make it any less beautiful. Characters      Nothing bad to say about the characters. You have characters that you want to hug tightly, and you have characters that you just wanna punch. Simple as that. But, most of the characters are either really adorable, gorgeous, or just straight up hot. You'll know when you see them. Overall      It's a cliche, you know, the same isekai / reincarnation manhwa, but it's still a gem, nonetheless. And, so far, the main character is really likeable, so that's always good. And this is the first time that the dad has been sweet before death. Would you imagine that.      Other than all of this, I reccommend you read this. It's a good read, and so far, I'm really enjoying it. I just hope it has this good of pacing as more chapters come out.

The art is clean and colorful. Love that the mc is wavy haired and changes clothes which helps distinguish the scenes from one another. For once we get an actual loving father, not your typical overly hot knight but a father that takes on the role of both the mom and the dad and he's definitely nailing it. The father daughter relationship is adorable that it would really hurt me if the dad doesnt survive in the current timeline.  When the mc uses her knowledge of future events the story still showcase her intellect, like she was shown to be more than capablle of leading the household before going back in time so its only right that she is not portrayed as simply someone who knows the future. The story is wonderful, instead of having the mc plot for revenge, she decides to save the household from her stupid family members. This matches the type of character our mc is, smart and willing to take on the role if she knows that it best suits her. 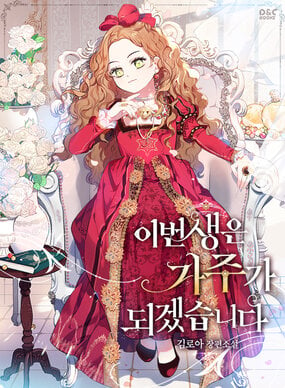 I Shall Master This Family (Novel)