I Hear the Sunspot - Reviews 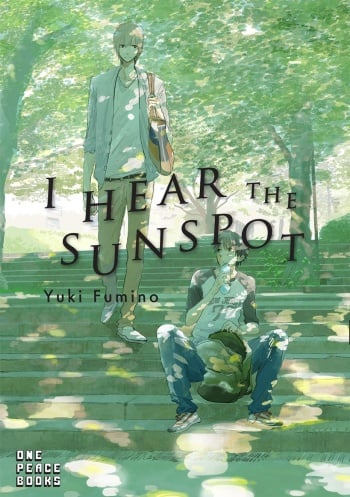 I really, truly loved how the story began, it wasn't even shounen-ai (it was but extreeeeemely faint) until one chapter when we realized (I mean the mangaka wrote this) that the mangaka had no idea that she was supposed to make this manga to be "boys love".... hah...

So, that resulted in the part of the manga that finally turned into boys love to be very... unnatural? Out of character? Embarrassing...?

Also, as chapters progressed, the story worsened. It literally just "dragged on" although it could have ended much sooner. Also, towards the end (especially the final chapter) there was an unnecessary need for drama and tragedy... I won't spoiler the ending (whether it was good or bad) but in the final chapter I couldn't even really "get into it" because the story was, more or less, ruined halfways. Too bad. :[

In regards to the Art I will rate it with a 6/10 because the style is kind of unique; but the faces do look off a couple of times.

The storyline did drag out a little bit after about halfway maybe a little further BUT.. The manga itself is short enough for you not to notice.

The typical mix ups happen, but I like how slowly the story progresses, it makes all of the outcomes that much sweeter and more enjoyable

It kept me interested through the whole story, I'd recommend it!

The story is really good. It brings up a lot of good points, like how the hard of hearing and the deaf aren't the same, how it's possible for people with normal hearing and poor hearing to communicate effectively, how important it is to get to know someone, and a lot of other things. One that really hit me was how others tended to think that people with poor hearing were more fortunate than people who are completely deaf. I can really relate to that. I have mental disorders, but not the ones bad enough for me to need special classes or anything extreme. I have autism, but it's high functioning so it's not as severe. It's a lot like being hard of hearing. Both are in the middle. Neither is at the normal end or the extreme end and so both are often left out or ignored. The ones in the middle tend to be expected to just go along like the normal people and are suposedly better off. I wouldn't say it's worse than being on the extreme end, but I don't think it's better. People can accept extremes better than smaller differences. To them, it's not a big deal in their eyes. The ones in the middle are just looking for pity or aren't working hard enough or whatever. They can be normal, but choose not to be. It's wrong, but people often think like that because the difference isn't huge enough to make it seem impossible. As the manga shows, there were many options to help the deaf, but those hard of hearing were treated seperately and many expected them to act how a deaf person does (rely more on sign language, not be able to speak well, etc) or act like someone without hearing issues at all. They were expected to go one way or the other and if they didn't, there was almost nothing for them. However, the main character doesn't see it that way. After he meets a schoolmate who is hard of hearing, he understands it's not the same thing, but it is still just as serious and important to consider. He wants to help both the deaf and the hard of hearing.

The manga is shounen-ai, but the author apparently didn't know it was supposed to be until after it started. So suddenly, a bit of shounen-ai like circumstances happen. I think the story itself could have been shounen-ai without the sudden kissing and stuff. It was kind of obvious the author wasn't good or wasn't experienced enough at writing BL and the story wasn't intended to go that route. The added kissing felt forced and awkward. The fact it was rare and it was the only thing that was plainly obvious as BL made it more awkward. It should have stuck to a more implied relationship without the kissing, or left the kiss till the very very end (although the last bit looked like it hadn't finished yet...).

Overall, the manga was a bit hard to follow sometimes. Granted, I'm not all that experienced with manga...partially because I avoided it for so long partly because I had a hard time following some. I know how to read, but sometimes I can't tell the characters apart or who is saying what. That wasn't the problem with this manga much though. It was more a problem of figuring out the time gaps because it seemed that time passed but I didn't see anything saying how much. Then again, I'm reading a translated version online so it could be that.

I like it. After I think the first volume, it started to feel odd. The characters didn't feel the same. As someone, pointed out in another review, the characters were becoming more out-of-character. It just felt weird, but yeah. The end was also pretty dramatic for no reason, but it was still cute.

Anyway, onto positive things! I absolutely love the art style. It's really nice in my opinion! I know a lot of people say how it's not that great but I personally find it to be very appealing<3 Also I found the charcaters to be very interesting (earlier chapters)

This was one of the stories I felt like I had to write a comment on, it was that unique and precious! Initially, I would like to start by saying, do NOT read it by just focusing on the BL tag. Because it made me pretty sad to read another comment here that harshly criticize it due to not being a proper(!) BL. It is definitely faint, you don't see those lovey-dovey scenes you would see on those plotless mangas just for the eyes. But rather, you see how MCs value each other deeply and their relationship develops in a very natural way, not like in other mangas where everything happens like a fairy tale. This is more realistic!

The story is focused on a very sensitive topic, and I truly believe that sensei did a good job, because it is very precise depending on my own experiences. I also have hearing loss to some extent myself, and I have been feeling like reading my own life. It was that precise and made sense a lot. I believe that it may be hard for people who don't have issues to understand how a disability makes someone so insecure and self-loathing. In that sense, this manga did a very good job to convey what it was trying to make us aware of. I believe the BL was just a cherry on top because it was a full ride of emotions, background stories of very well-planned and realistic characters. I am just very happy that someone out there, was kind enough to bring this topic to the light, and wished it would make people even if slightly a bit more aware.