I Hear the Sunspot: Theory of Happiness - Reviews 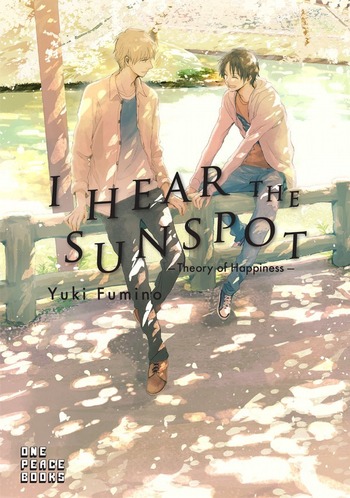 There's technically nothing wrong with this but it's so... slow. It's taken two whole volumes to set up their relationship, and you can tell that the romance wasn't planned from the beginning. I don't even hate slow burn stuff but the series just isn't that interesting to me otherwise.

That said, I do appreciate the focus on the hard-of-hearing/deafness. I like that the mangaka explains how it's different for everyone and that you can't group all people with the same/similar disability together (I can relate to that with other disabilities and it's very true). Kohei's struggle to accept his increasing hearing loss also felt realistic and I think that was handled pretty well.

I just don't really have any motivation to read the sequel. The relationship isn't gripping enough for me to sit through its development and I don't care about the characters as individuals, either. This is purely my own preferences, however, and I can see why people like this series. Honestly, I feel kind of... guilty, almost, for not getting into it because I feel like I should have enjoyed both volumes more than I did.

Maybe I'll check out the sequel eventually, but as it stands, I'm not prioritising it. Again, it's entirely a personal thing.

The disability parts of the story were by far the most interesting and I could tell the mangaka had done their research. It's nice seeing the downsides and struggles of living with a disability discussed in a very normal, non-judgemental way. I think that aspect is probably something that applies to readers with any kind of physical disability/impairment. While the story is set in Japan and deals with Japanese society, I think in many ways some of the struggles those with disabilities face are universal. Of course there are going to be some differences and it's not all exactly the same, but on some level, I feel that Kohei can be relatable.

This story had me almost tearing up this is a masterpiece omg it's so good it's worth the read  you will not be disappointed.

Oh, I have to leave a comment on all sequels of this unique and precious story! To start with, please do not focus on the BL tag while reading it, because the BL is a faint cherry on top. The story is focused on a very sensitive topic which is very well conveyed with all thoughts and emotions. It really conveys how having a disability makes someone feel very insecure, avoid communication and make self-loathing. It conveys even better the dilemma of people who are hard of hearing like myself where your problem is not even considered as a problem and you feel forced to pretend to hear everything well, feel ashamed of yourself, and eventually feel like not participating in anymore. I truly wish that just more people would read this story and be more aware of their surroundings, not by pitying but by being patient and understanding.