I Fell in Love, So I’m Streaming It - Recommendations 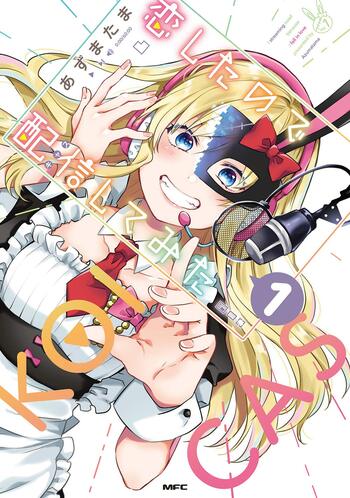 If you're looking for manga similar to I Fell in Love, So I’m Streaming It, you might like these titles.

Both MCs resemble a dog, check.

Both have a scary face but are very soft, check.

Both are stories of forbidden relationships... to an extent...

I enjoyed reading both, check.

Miharashi-sou no 6-nin no Hanayome

The harem manga centers on a young man whose mother who lives separately asks him to become a manager of a room-share apartment building, and take care of five older and pampered young women.

Before she died, Taga Reiji's mother made arrangements to ensure her son would not be alone. What Taga did not know about these "arrangements" was that he would be enrolled into a special class at the school his mother founded where prospective fiance candidates would all vie for his hand in marriage. How will Taga's new life of constantly being surrounded by girls unfold and will he be able to choose just one?

Teishu Academy is a school for the wealthy, high classed students that the upperclassmen can offer. The Socie keep a lookout for anyone who tries to bring in any portion of lower class culture. Those who break the rules are then crucified and called "Criminaes" and are set to be shamed by the public. Due to an increase in "criminaes", Hajime, the Shvarie du la Fleur of the Socie, has announced that the Socie will conduct unscheduled searches through each student's bag. A new student, Rentarou, is shocked at this since he accidentally had anime material hidden inside his bag. He desperately tries to run from the Socie, but gets caught by the Socie leader herself! But instead of a severe punishment, she decides to have him join her in creating a doujin game.

Yuusuke is a guy who loves flat-chested girls. On his first day in high school, he meets the girl of his dreams who is also his sempai, named Momoka. She asks him to join her club, which is in trouble due to the lack of members. Despite his childhood friend's warning, he decides to join the notorious and mysterious club.