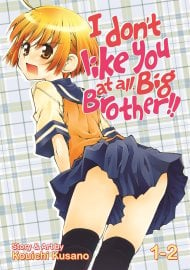 Junior High School student Takanashi Shuusuke has a problem. His childhood friend Iroha has returned with a massive crush on him. And so does class president (and yaoi fanatic), Mayuka. While Shuusuke must choose between them, his biggest problem is his younger, adopted sister Nao, who has become jealously possessive of him. As all three girls vie for Shuusuke's attention, he soon learns that all is fair in love and war!

874 users are tracking this. Log in to see stats.

Shuusuke is the stereotypical image of young boy in his adolescence, aware of female bodies, that is always looking for some cleavage, owns porn magazines, but he can't deal with girls at all. Maybe there is one girl: his dear sister Nao. Nao is one year younger than her brother but she's always been in love with Shuusuke: she lures him in lust with her body or her words acting pure and ashamed to trigger Shuusuke's reaction. But their relationship can't continue like that, unless.... They're not blood related! Nao has been adopted when she was 4 and Shuusuke 5, so all of a sudden the gates of forbidden love are open?! Plus/minus considerations: STORY: I don't mind stories with incest as plot, this is probably why I don't really have a problem finding this content fascinating. The fact that this is fake incest not only makes it more open public-wise avoiding critiques, but also there are a series of rules that CAN or CANNOT be ignored due to Japanese laws. I like the premise: not only this manga has a great sense of humor when it comes down to lewd scenes or comedic value in general, but the originality behind the female protagonist, Nao, that pushes the tempo and models the male protagonist, Shuusuke, according to her taste and to the type of content the readers of this manga are looking and aiming for. If the basis is really good and I appreciate it a lot, there is one thing (two moments to be precise) that strongly upsets me. There's a moment in the middle of the manga where an accident literally stops the progression and the development of a great couple with the intent of buying some more time to give a proper chance to other characters: in one single chapter a manga that was going full-speed, towards the right direction, with a great push from a harem contendent, found itself locked story-wise for at least 20 chapters to resume the plot just like it was 30 chapters back. I also didn't like the ending, I couldn't believe that was the big finale the author was aiming for: slightly disappointed. (-) ART: it might be a controversial topic, but I feel like webcomics can't be judge with the same meter of paper magazines because of budgets and assistants, so I'll be more esilient about it. I don't like the art style: I don't know if it is the mangaka's intent to draw bodies like they have been, but they don't look good in my opinion. I appreciate a lot the expressions characters make when they're spaced out (ex. Nao trying to convince her parents she never left home). To sum up: they don't look good, but they fit in the context. (-) CHARACTERS: best element of the manga for sure. Each character brings something unique to the table with different personality, different routines, different fetishes and a different type of comedy. I don't think I found a single character that I disliked, very positive. On the other hand I don't like how the relationships between characters have been handled: I don't see it as a subjective thing because the manga ended in a different way that I expected to, but the dead times and the pace of the story abruptly stopped for the accident I quoted earlier, ruined the tempo and the chance of a clean development. (++) I had a great time reading I Don't Like You At All, Big Brother!!, I managed to highlight some great scenes from this manga and I wouldn't mind reading it again. I think the story has one major problem that other people might interpret in a different way, but for me it was too impactful and I can only see it as an excuse to buy some more time. I'm not a fan of the art style but it does its job, so whatever.Here is the link to the thread of the specific conversation so you can see my reacitons and my considerations hidden in the spoiler buttons. 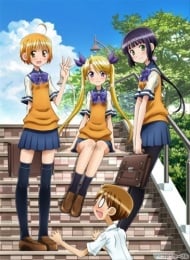 Because I Don't Like My Big Brother at All!