I Choose the Emperor Ending - Recommendations 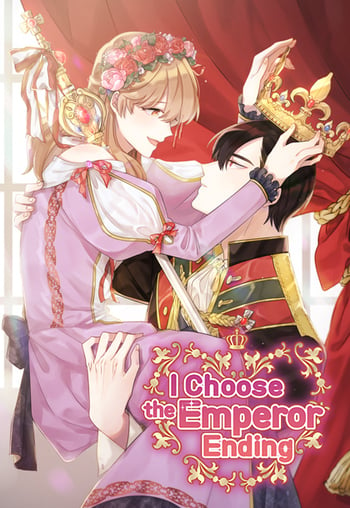 If you're looking for manga similar to I Choose the Emperor Ending, you might like these titles.

both have author transported into medieval story that they themselves wrote, and are working with the main lead to change the story to get themselves out of the fantasy world

The authors themselves get stuck in the novels they wrote. For them to survive in this world where they originally did not exist in, they have to work with the ml to find a way back home or just to simply lend a hand to your own creation (Emperor Ending).

And as the story progresses they find  new sides to the story they wrote.

Both stories have a different trait that makes them stand out from others like these mangas, yet many common aspects are shown in both reads. I choose the emperor ending has virtual reality, and a sort of game preference. While As you Wish, Prince, has the whole, book came to life theme. Likeable characters in both mangas make these novels enjoyable. With some twists and turns these mangas are more alike than not, that being said i throughly enjoyed both reads and how the male lead relied on the female lead, making them not as perfect without one another.

Yes, both stories have its "god" (its author) came down to their world as the female main character. So, you got the creator's perspective and advantage, though not as much as I expected. Romance developed gradually between the creator (the female lead) and her creation (the male lead). I've completed reading "As You Wish, Prince", and chapter 50+ of "I Choose the Emperor Ending".

Lindsay is a top-secret spy about to take on her most difficult mission yet: to disguise herself as a man?! Her target is the Duke. Rich, mysterious, and… an infamous womanizer. Cutting her hair, drinking elixirs to hide her voice, as a servant she must infiltrate his manor and investigate the mysterious disappearance of lords and ladies in the area. However, when she meets the Duke for the first time and he kisses her, is it her identity that's compromised or her heart…

Both webtoons includes female protagonists that are trying to hide the fact that they are female by disgusting themselves as male.

Both Female protagonists are cross dressing and yet, they both still catch the eyes of their own duke. Both of theme were AWESOME!!

Both have similar themes, FL disguised as man, ML thinks they're gay because they've fallen in love with the disguised FL.

The Knight and Her Emperor

The talented but overlooked knight Pollyanna comes face to face with an ambitious king who finally acknowledges her worth. "I like hard workers, because I am one," Luxos II declares, as he shares his dream of unifying the continent. Moved by his vision Pollyanna vows to fight in his honor, and together the two set out to build a grand empire. But what happens when the young king slowly realizes, battle after battle, that this stalwart knight has conquered his heart?

Both female main characters try to fit in as they are in the field where men predominate (swordsmanship and science).

Both female protagonists have useful skills in battle, and both of them are loved by a man of great power.

She is a girl that everyone loves but she cannot speak of the love she has for her brother because her brother already loves someone else. In despair, she gets dragged into Ancient Egypt by a snake-shaped bracelet that is engraved with a three-thousand-year-old love oath. There, she meets the Pharoah’s heir, a party boy.

At first, I didn't relate both stories because there are many other stories with this kind of story type (Person in a Strange World or Isekai). But when I read chapter 52 of "I Choose the Emperor Ending", suddenly I was being reminded of "Pharaoh's Concubine". I've read many this kind of manhwa/manhua, but I think it's the first time with the same kind of plot. To experience that (sorry, if I said more, it would be a spoiler), right in front of their very own eyes, just when they thought they would be happy... poor Edward, poor Sese.... They must have felt so deep in hurt. The reaction in chapter 55 was the same too.

Both have romance developed gradually with the female leads came from another world/another time. But "I Choose the Emperor Ending" is hilariously  funny, while "Pharaoh's Concubine" more historic with its Egypt background. I enjoyed reading both. I've finished reading Pharaoh's Concubine, while on chapter 55 for I Choose the Emperor Ending (still on-going).

One day, while eating chicken, Sehyeon was transported into the novel she had written in the spur of a moment, becoming the idiotic princess Ione. What else could happen today that would influence the fate of Ione's life and death? In order to survive, she had to make sure the Emperor wasn't killed! As she dashed away to prevent the incident, she ran straight into a man loosely gripping a sword dripping with blood. Nickname: King Regent Kimchi, real name: Aenard Ibn Bonaparte. She was screwed. The first person she had to encounter just happened to be the villain who knew how to read her mind! "I'm the only person who knows that I can read minds."

Amelie Bourbon was a witch and a woman killed by the tyrant. Just because I criticized a novel doesn’t mean you have to make me into the supporting character Amelie, who died from the start, becoming the trauma and trigger of the heroine. I’m scared. I don’t want to die. I don’t want to be harassed. Let's run away! But just when Amelie visited her family to inform them of her departure, the Emperor (the tyrant) arrived. In order to escape, I transformed into a bird by magic. But the Emperor took me with him!!! What’s going to happen to me?!

Tricked into Becoming the Heroine's Stepmother

After her death, Daisy Heidi is reincarnated into the world of “Why Did the Duke’s Daughter Roll Across the Pumpkin Patch?”, a so-called “tragedy” novel where the beautiful heroine Pierta indulges in reckless lust and hedonism with ten ardent suitors to a bitter end. Though Daisy is reborn as a poor commoner in this world, she has one distinct advantage over others in her second chance at life -- she’s the author of the original novel! When fate brings Daisy into the lives of the novel’s heroine Pierta and her dashing father Duke Henstone, Daisy vows to do everything she can to prevent Pierta’s future of despair.

Primabelle is astonished when she wakes up to find herself in a novel of her own creation as an obscure painter who gets killed by the male protagonist, Prince Rainsis. The world she created has not been kind to Rainsis. In addition to being colorblind, he has been shunned and feared his entire life, for a prophecy had been made that “the one trapped in a black and white world shall drench the empire in blood.” Primabelle resolves to disprove the prophecy after witnessing his misery firsthand. To do so, she must track down his destined other half. The only problem? All she knows about the fair beauty is that she has black hair and crimson eyes. Will Primabelle be able to help Rainsis see the world in all its splendid colors and find true happiness?

I possessed a supporting character in a reverse harem novel. As a young concubine who gained the interest of the empress. The concubines, the male lords, eventually killed her for treason. Fortunately, I possessed her just as she was entering the Imperial Palace. Everyone in the Imperial Palace was wary of me, but didn't hate me yet. I don't need, nor do I want to be loved by the empress. "Come to my room tonight. I'll read you a fairy tale!" 'Woo, don't cry. I'll give you this." But why is everyone so soft towards me? I couldn't understand.