I Belong to House Castielo - Reviews 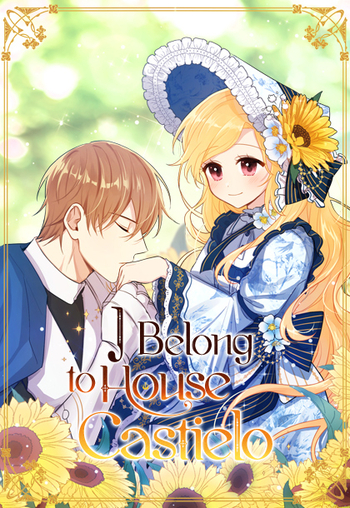 Don't read the synopsis for this manhwa as it does not summarise this story very well. The picture of this manhwa above the synopsis also sets a different view for this manhwa. This is really about a cute little girl who is the illegitimate daughter of a duke, this duke is feared by all as his dark red eyes look like blood. Estelle (the mc) experiences childhood trauma and we are shown how she overcomes it throughout the story. The characters are really sweet and there is lots of mystery 🥰

I'm sure most people will like this. It just wasnt for me. The main character was so stupid as a child. And you might tell me "she's supposed to be stupid, she's a child." But she's actually a 24 year old in the body of a kid.

She let's herself get tricked into doing embarrassing stuff by the male lead(who I'll get into soon). And when she gets told by her father not to tell anyone of her gift, she immediately turns around to the male lead and blabs her mouth IN THE SAME SCENE HER FATHER JUST TOLD HER TO TELL NO ONE. Literally seconds after her father said tell no one. And then, again, she turns around and tells her teacher.

Now, the male lead. Maybe this is normal in these kinds of stories, but he must have been like 8 or 9 years older than her. I believe this because the older brother mastered the use of his aura at age 12. ML says he "mastered it at a very young age" and "it takes several years of training." He also says he started learning swordsmanship later in life than her older brother did, and after learning the sword only then did he learn to use his soul stone. Secondly, he seems insane. Apparently he went through trauma when... well, it's spoilers if I say it. It happens around chapter 40 if I remember right. Anyway, FL finds out that ML is pretty much solely nice to her, and is actually a terrible person to everyone else. He also apparently brags about how close he is to FL. I just think these are all super unattractive traits, and could not possibly understand why anyone would like a person like that. Isn't this the same as being two faced?

I mostly just can't possibly understand anyone who ships these two. The story is good, but the FL is kind of stupid and weak minded. Plus, it's weird to fall in love with someone who carried you when you were a child. Some people say age doesn't matter, but if the gap is more than a couple years, AND the ML is a bad person, I just can't accept it.

From chaptet 1 to chapter 120 this story lived to disappoint. Always getting my hopes up about something good finally happening, and then dashing it at the last moment with another Estelle Moment. Let me tell you about darling little Estelle.

Honestly I'm not even going to talk about the plot because it's non-existent and that's all you really need to know. No, I'm going to spend this entire hate rant dedicated to the true star of this show, Estelle. This whiny, spoiled, immature, ignorant little WOMAN-child fills the list of reasons why I hate this manga top to bottom.😒

She's honestly the most pathetic self righteous, useless Mary Sue I have ever seen written. Like the whole point of your existence is to SOLVE problems not keep moaning for another 20 chapters, casueing more problems so brother and father can clean up your mess. And shea a bland narrator. When she finally does get older and start doing things she just starts moaning over her knight instead. Which for the record. To all the haters I think he was totally in the right with his actions and Estelle even admits that she was arrogant because she never thought that he would turn her down. That was the icing on my hate cake.

Y'ALL SHOULD JUST READ THIS! ITS A MASTERPIECE AND IT MAKES ME SOFT. ITS JUST TOO CUTE ^_^

AND THE STORYLINE IS JUST DEVEOPED SO BEAUTIFULLY LAYED OUT.

OK the start was quite cliché BUT the characters we were exposed to could be considered round and non static . I liked the beginning.  The story was quite dynamic , we got to see the flashbacks and etc.  BUT sa the story moved forward, more and more stereotypes were used and more characters flowing around were becoming more typical  ( by that I mean that you can organize them into the categories of the tsundere, the cute and innocent, the kind and sexy types if you have already read some manhwas in the past) and the moment she grew into a young adult is the moment I got completely disappointed. I mean what was I expecting ? I was expecting for the story to be less cliché and more focused on not just romance & romance related drama but also to have some new round characters. I believe I was expecting too much because the start was quite refreshing for me . I can still appreciate the artwork.  It was done amazingly , and I mean not only characters but also the locations and details in clothing . But not gonna lie to me the plot and the characters development  went downhill.