I Became the Wife of the Monstrous Crown Prince (Novel) - Recommendations 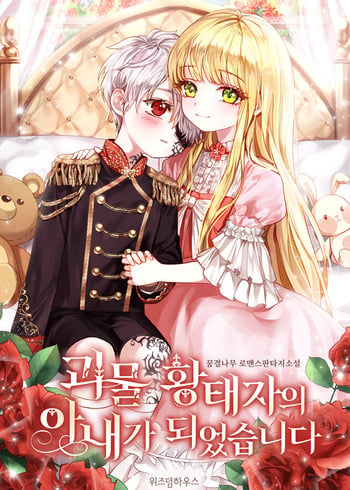 If you're looking for manga similar to I Became the Wife of the Monstrous Crown Prince (Novel), you might like these titles.

There is a family, who for generations, were rumored to be monsters. The lord of the Halstead castle, Erden. He adorns a mask to hide his scary face. Leticia, who was sent to marry Lord Halstead in place of her sisters, began to be referred to as 'the woman who married the monster' and was pitied by others. but there is a secret that they don't know. "I'm always grateful to you, wife. You're so kind to the unsightly me…" "Well, since I'm Erden's wife." "I need to divorce you soon so you won't be troubled by such things anymore… I'm sorry but I lost the divorce papers." Well of course, that's because I burnt them. I need to spread more scary rumors about the north to the lawyers. I am definitely not divorcing such a handsome husband!

The Frog Prince and the Witch (Novel)

He lost everything. No name, no body, no voice. Finally he received his redemption. But he was still unsatisfied, because of his greed… he still wanted more! It doesn’t matter if he’s treated as a madman. He’s got nothing to lose anyways. She is the only one he has.

Irene Song had transmigrated inside a novel and became the villainous daughter of a duke. However, the Duke, who was unaware of this fact, simply thought she had amnesia and send her off to marry the second prince of Rennes Empire. Little did she know that the second prince was cursed by an evil wizard and turned him into a dog during the day and could only turn back to a human at night. What’s worse, she even named it “tofu” after she found it wandering in the Imperial Palace. Who would have known it was her own husband!

Navier was the perfect empress, however, the Emperor wanted a wife, not a colleague. And so, the Emperor abandoned Empress Navier and placed a slave girl beside him. That was fine, until Navier heard the Emperor promise the slave girl the Empress’ position. After much agonizing, Navier decided she would remarry the emperor of the neighboring country.

How to Live as the Enemy Prince (Novel)

After his death, Bern awakens 10 years into the past as the third prince of Kailis, the enemy country. He became a weak and incompetent prince who was to be assassinated before turning 15-years-old.

Once upon a time … A pretty princess has just been born in the kingdom of Party Land. The three fairies are invited to her baptism. When they are filling her benefits, the malicious witch excluded from the festival launches a curse against the poor child… The day of her fifteenth birthday, the princess Rubis crunches on a poisoned apple and is captured in a quite particular jewel: the Sweety Gem. In 1998, Yan, a young model, finds the jewel and embraces it by accident … The princess is released from her long sleep…

220 years ago, in the legendary Dragon Demon War, Hero Azell ended the war by killing the evil Dragon Demon race's King Atein. He was able to save the population, but as a consequence, he was cursed. While he was dying, the high magician suggested a gamble that might save his life. 'The Dragon's hibernation is the only key to saving your life.' Instead of a human's sleep, he slept the sleep of the dragons and he was able to overcome the curse. Now he is realizing that he has slept way longer than a human's life span.

Renee, a girl cursed with immortality, was fired from her job for being too creepy and is now seeking employment. One day, she is recruited to be a servant for the prince. However, the prince was imprisoned due to his “curse of poison” that kills everything he lays his hands on. These two lonely individuals who hold contrary Curses are brought together by fate.