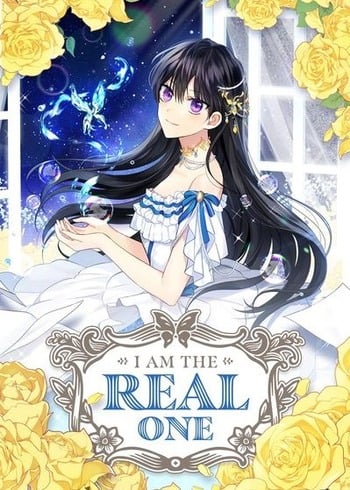 Ignore the reviews that tell you to skip chapters. Thats a pretty big red flag that tells you they aren't reviewing it properly and aren't thinking straight (hell, if you had to skip chapters, those they suggested are definitely not the ones).  Story I am the real one, also known as actually I was the real one is a story about Keira, a grand duke's daughter who was executed after being accused of not being his family after Cosette, another lady, claims she is the true daughter. As the guilotene slices through her neck Keira suddenly wakes up in her bed 2 years before her death, and must set out to stop Cosette from manipulating the duke's household and causing her death.  As of chapter 40 (most recent chapter as of posting review), the story is quite good, despite faltering slightly in the start. The first 7 chapters show Keira's life before the timewarp, her desperate attempts to gain her father's affection, and the dismantling of her life by the cunning Cosette, who manipulates both Keira and the servants/duke into being on her side. This section of the story is incredibly important as it shows where both where Keira went wrong and what will happen if she fails again. Skipping this (as some other reviewers say) makes no sense whatsoever and will result in you not knowing a lot of what the story is talking about. At this point, the author suddenly goes for a shift in tone, from a darker, revenge story to a far more lighthearted one. We spend 12 chapters essentially showing a young noble lady being all shy and learning how to have fun, be social and talk to others, as previously she was too obsessed with attempting to get the duke to recognise her. The problem in reviewing this is that, whilst it is more like a sidestory and not in line with the rest of the plot/tone, its still done very well. So whilst other authors might not have been able to pull this off, Samwol does, and therefore I can't take any points off for it. It also doesn't last very long so it doesn't majorly detract from the story.  The story then continues on, introducing the battle of cunning and wits between Keira and Cosette, the mystery behind the time magic and who cast it, as well as exploring the strained relationship of the duke and his daughter. There is a lot to read and think about, and it is obvious that the story has a good foundation to push foward off of. Art The art is great throughout the series. Environments are lively, clothing is intricate and detailed, facial expressions are done well and at no point does the art majorly dip in quality. It is simply good all around. Characters The characters in this series are decently fleshed out and have room for growth. Since the series is quite new its obvious that some work still needs to be done for the characters to truly grow and have unique personalities and goals, but that will all come in time. For now, all the characters are well written. Cosette, although rather limited in appearances so far, is a great villain. Cunning, devious, manipulative and two faced. You'll really learn to hate her. Keira is a mixed bag, she is strong-willed and intelligent, having studied hard her whole life, but she lacks some emotional intelligence and common sense since she grew up sheltered and alone. The only real complaint I have about her character is that it has yet to reinforce the trauma of her death. Unlike other similar timeskip series, Keira clearly remembers her decapitation and death, and upon waking it terrifed her, however it has not really come up since.  As for the other main and supporting cast members, they all have their quirks and personalities. Her father initially seems cold and serious, but his inner thoughts and struggles with his relationship to his daughter are slowly explored over time.  Summary I am the real one has a good solid plot, great art and a solid set of characters. It is interesting to read and clearly has a lot of potential to become a great story and manhwa. If you like this genre of Manhwa, I definitely recommend you read it.

This is no good, skip to chapter 6 as averything up to then is just what happends before the time loop that gets deleted because of the time loop, so it doesnt got anything to do with the story, all those 6 chapters says is, evil fake daughter shows up, she wins the heart of the maids and such and uses them to squeeze the real daughter out of the family with leies and stuff, she enda up being the reason the real daughter gets executed. After the time loop things just gets pathetic, it starts off well the next chapters after ch6 but it doesnt take long before the story take a massssive nosedive, the guards starts drooling over the MC kid, she reads a romance novel and get tricked by a dude just because he called her pretty and she was literally ready to matet him for it, all in all it makes me wonder if a 2 year old kid wrote this dumpsterfire. She got treated harsh by her dad, after the fake daughter came in the picture she gets screwd in all ways possible by lies and deciet, it goes so far she ends up killed where her dad doesnt lift a finger because of lies and all the trickery, BUT yeah someone who got screwd this badly and know exactly how dark peoples hearts can be, she gets tricked by " oh  your beautiful "and ends up wanting to matet him?  For some reason the MC out of nowhere looses so much IQ she can barely open a door handle, the writer really just trashed this story out of nowhere sadly.