I Am Here for You - Recommendations 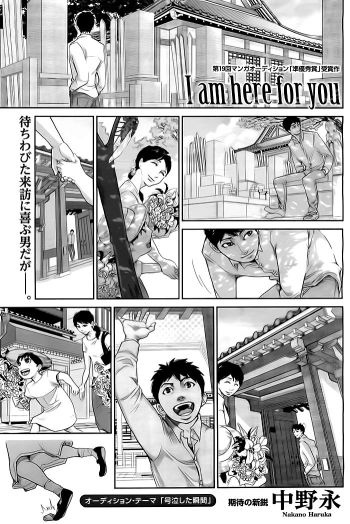 If you're looking for anime similar to I Am Here for You, you might like these titles.

Passengers of the night

A tired woman missed her last train home. She has to wander the city all night long, but she discovers that she's not the only soul waiting for the sun to rise.

Spirits from the Night

A sand man shows up in a child’s bedroom at night. He invites a dusty stuffed animal on the shelf to go out over the hill. The child follows them to get his animal back into the darkness of night.

While two monks are on a pilgrimage to Kumano, they seek shelter for the evening at a young woman's house. That night, as they sleep their hostess sneaks into their room and, enamored with the younger of the pair, attempts to seduce him. Desperate to escape her persistent advances, he refuses her promising to seek her out on his return; but unable to contain her burning passion, the woman chases after him. Fleeing for his life, the young monk seeks shelter from his stalker’s demonic aura in the Dojoji Temple, but can the sacred bell and other priests protect him from the insanity of his possessed admirer?

Two high-school students are playing in the ruins. They hear something from the darkness and one of them goes deep into a dark room where something suspicious is hiding and both of them were taken their hearts out. Later a boy and his sister drop by the ruins...

A loyal son does not go out to play, but works hard fishing every day to please his father. One day, he finds a pot caught in the net. When he opens the pot, a demon appears from inside. When the demon tries to eat him, the young fisherman, says to the demon “There is no way you could fit in that pot.” Indignant, the demon gets in the pot. Now trapped, the demon asks the young man to let it out...

The story of Nosferatu vampires glimpsed by a boy who gets lost in a forest.

Watanuki faces challenges in every area. Spirits chase him, his best friend Doumeki isn't really a friend, and his boss Yuuko seems to have mistaken him for a servant come housewife. When Yuuko requests that both of them join her in accepting a special invitation to a collector's house, he can just hear the trouble coming. Upon arrival, the house proves to be more than a bit unusual, and the other guests are almost scary with their fanatical collecting. But, the worst thing about the situation is the knowledge that for all the weirdness Watanuki can see, it is absolutely certain that the mysteries are way more complicated that he thinks. Depending on Yuuko's arcane knowledge may be the only hope.