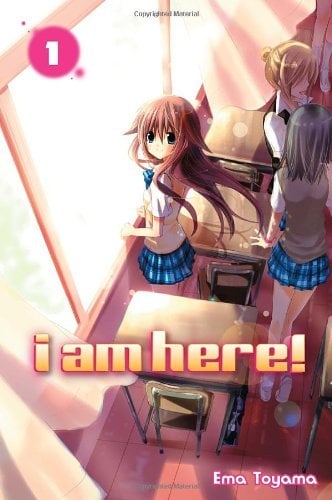 Invisible to her classmates, Hikage Sumino is an eighth grader with no self-esteem. Her only friends are the visitors to her Internet blog. One day, the most popular boy in the grade suddenly talks to her. Encouraged by this twist of fate, Hikage determines to transform her life and declare to the world, I Am Here!

“I am here!” is a manga I have conflicting feelings for. On one hand, a story about a girl, Sumino, who’s practically unnoticeable in real life and can only find solace with people on the Internet is a relatable story. On the other hand, said girl breaks out of her shell with everything falling into place almost perfectly. With that said, this is still a good manga, but it’s held down by some hard to ignore flaws.Near the top of the manga’s problems—but also one of its best strengths—is Sumino. She wants to have friends in real life, but people hardly notice her. But, Sumino’s personality shows through her thoughts and online blog, and it’s clear nothing about her personality keeps people away from her; there’s no sarcasm in her words, no heaviness to her demeanor, and no doubt to her courage. She’s a sweet girl who just can’t get noticed despite her efforts, and this makes her a character worth cheering for.But at the same time, while nothing about Sumino leaves a bad image, nothing about her rounds out her personality. Putting aside how unnoticeable she is, she’s practically flawless, having stayed the same from what’s shown in her early childhood to the story’s present time, as if her non-existent presence did almost no damage to her personality. But, this isn’t to say Sumino is a bad character, it’s just that what stands out about her amounts to being very likable and not much else.Still, Sumino’s likability is enough to make the story worth the personal involvement. Early on, it’s hard not to feel sorry for her as she tries and fails to break out of her shell. But as more people notice her, the story becomes less about Sumino’s want to change her life, and more about the love triangle with the two other leads in the playfully jaded Teru and the gently serious Hinata. But this isn’t a bad thing at all, as the story believably ties in Sumino’s development, her online blog, and Teru and Hinata’s involvement to unify the whole story instead of the romance being an afterthought to a good premise.Even then, some things about the story don’t mesh as well as they should. There’s a coincidence in the love triangle set-up that’s almost too good to be true, but even ignoring that, there are two moments in the story that are major turning points for Sumino that are unfortunately mishandled. The first scene solves a problem so quickly it’s a wonder how it ever was a problem to begin with, and the second scene easily pushes Sumino from being a very likable and flawless character to an outright magnanimous saint. Thankfully, the rest of the story doesn’t get close to being as eye-rolling as these three moments, and in the meantime carries itself well through pleasant artwork.The artwork is easy on the eyes, good, but nothing outstanding. Well, except for Sumino’s face. Look at it. It’s cute. Very cute. The kind of cuteness less seen in a shoujo manga and something more akin to a male-targeted series. A small part of the sides of her hair also stick out, like animal ears, and they extend and retract with her excitement and sadness. The art adds to her likability, which I know is a word I’ve been using a lot in this review, but I can’t stress that enough.And maybe that’s the big reason this manga is still good despite its problems. Despite Sumino’s simplicity, she has a lot of likeability. Despite the story being heavy-handed at times, it’s actually very focused and knows what it wants to say. Maybe I’m giving too much credit to Sumino’s likeability, or maybe she has the kind of charm that can make someone enjoy a good if flawed story. Worth a read? Well, reading “I am here!” is like growing a sunflower against a strong wind. The stem will sometimes bend, but those who can work through that might grow something beautiful.

This manga is  about conflicts about love and friendships. It's not much of a romance but there is. The main story I think is being noticed. Heee---the end is so funny and sweet.Megapig got in love(he is a boy) asked for advice from Teru and Hinata and Megapig 's crush cried because she thought he liked another girl. But in the end Megapig didn't need any of their advice and he said It was a waste of time to them lol Teru. And Hiaata said "Damn that pig!"

I am here! is a touching manga that everyone should read at some point. I love all the hints there is in the first book that foreshadow who blackrabbit is (good luck finding them). I actually became good friends with a person because of this manga. We argue for 3 straight hours about who jackrabbit was until we finally could find a copy of the second book. That shows how the plot just sucks you into that world. I for one can feel for  Hikage on a personal level because people don't tend to realize I'm talking.to them or they just don't care. Teru was my favorite character of them all as he was such a.well developed character and had many layers. Hinata also is a wonderful character though one may argue that he is too perfect because he essential has no flaws. The artwork was amazing and very detailed. I honestly have never seen such good artwork in a manga.