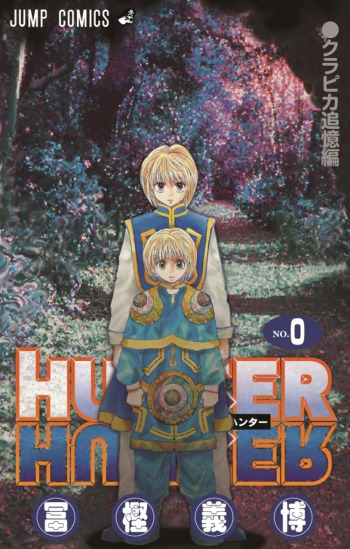 If you're looking for manga similar to Hunter x Hunter: Kurapika Tsuioku-hen, you might like these titles.

The World Rift. A giant line of water jets that divides the world in two. Eight years ago, an epic battle punctured a hole through the rift and strange creatures began to leak into the known world, making it so that the only ones who venture out to sea are fools and pirates.Cherry Blossom is one of these aspiring pirates, setting out to sea in order to find something important to him. Along the way, he crosses paths with Sun, a mysterious boy who holds the World Rift Tear, an amulet said to be the key to traversing the World Rift and discovering what lies beyond. Together, they set out into uncharted seas, inviting any grand adventures that awaits them!

A girl named Tika, that has a great, mysterious, power is involved in the cruel battle for hegemony between 3 great kingdoms.

Manga based of the toy named Treasure Gaust (Catcha Beast in America and Europa). With this toy, you can detect, catch and train invisible monsters who are around you.

Strange things happen on Fossil Island, as Rock, Kodama, and Osamu Tezuka are soon to discover. The island is covered with rocks shaped like people. Each visitor finds one of these rocks with his or her name on it, and each then enter into separate, bizarre dream worlds.

As a result of a large war, the world was eroded by a magical infection that distorted the time and space around it. Though magic has been outlawed since then, the effects of that war still remain. To uncover all the secrets of the world, "Lucky Solte," begins her adventure.