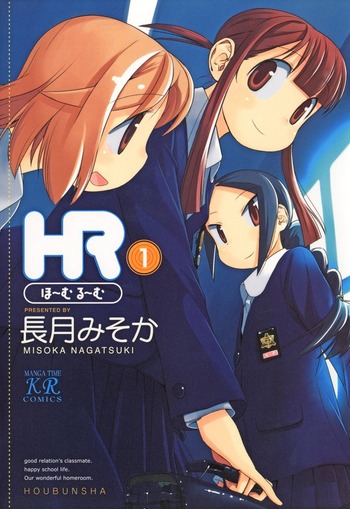 Foll the super genius grade school student Haruna Raika and her every day life. Where she's the class president, the room leader, the top student, and even fills in for the teacher when they've overslept!

Ichinose Akane, a second year in high school, is going to a new school, but once she gets there, she got herself lost. But Ninomiya Aoi, a nice girl who looks like a pretty boy, and Sanjou Midori, a beautiful girl who likes to play pranks, helps Akane. The three realize they're all in the same class, and becomes close friends. Now what kind of adventures will they have?

There's an idea that your blood type affects your personality: Type-A's are serious perfectionists, Type-B's are individualistic, Type-O's are outgoing, and Type-AB's are strange. This 4-koma features the four sisters of the Amano family, who are each very different from one another in looks, personality, and even blood type. Despite growing in the same environment, they each have a personality similar to their blood type. The four sisters go through their daily life together, each very different from the other!